OnePlus One, the smartphone which has made headlines not just for its impressive specs at affordable prices, but also for the notorious invite based system, will be available for purchase without the dreaded invites in India tomorrow. If you are wondering what’s so special about February 10th, it’s the day when Xiaomi’s Mi 4 goes on sale in India! 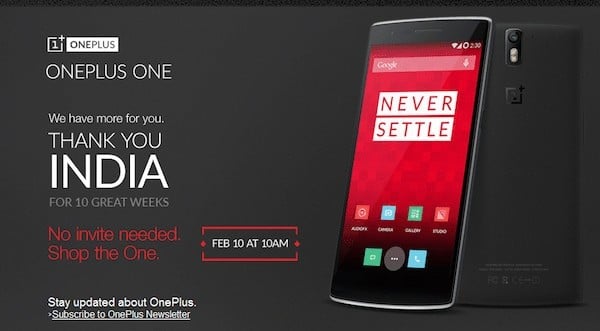 It’s been few months since OnePlus introduced the pre-order system and has conducted several open sales globally since then. But in India, it has stuck to the age old invite based system with interested customers hunting for invites on social media and OnePlus forums. Now that its real competition, the Mi 4, is getting launched, OnePlus has decided to open up the sale for 24 hours.

OnePlus has had a torrid time in India with its triangular fight between Cyanogen and Micromax. Since then, the company has announced its own OS, the Oxygen OS based on Android 5.0 Lollipop in place of the much acclaimed Cyanogen OS.

Tomorrow’s open sale on Amazon.in will not require any invites, so you can head directly to this page and place an order. The sale would be for limited quantity which is expected to stock out quickly given the high demand for the phone, says the company. The open sale starts at 10am tomorrow.

Update: OnePlus has also announced that the One will be going on open sale every Tuesday for 24 hours in all the launch countries (US, UK, HK etc). But in India, it’s an one-off event on Feb 10th.

Was this article helpful?
YesNo
TechPP is supported by our audience. We may earn affiliate commissions from buying links on this site.
Read Next
What is UPI Lite and How to Enable it on Any Device [2022]
#india #OnePlus One