WhatsApp has now rolled out yet another beta built of their app, but this time around, it comes with a hoard of interesting features including the inclusion of something called ‘Front Flash’.

Just in case you are unaware, the popular messaging app always rolls out their upcoming features to beta users first before pushing to whole of its user base. That said, anyone can download a beta version of the app from their website. Alternatively, you can download an apk file from file sharing sites like ApkMirror. Coming back to the update, the WhatsApp v2.16.263 comes with a total of four new features according to the official changelog on the Playstore.

Well, WhatsApp is generally quite slow in updating their official changelog and this time around it’s no different. Apparently the first two features have been there in WhatsApp for some time now and even the stable version of the app comes with these features. However, the same isn’t true for the last two. Now the beta version of the app comes with a feature that indeed helps you to zoom in and out of videos more easily. All you need to do is to just slide up and down with your fingers. That said, this feature is available only via the in-built camera app of WhatsApp. So just in case you want to make use of this feature do tap on the camera option located to the left side of the chat box at the bottom of your display, instead of the opening the camera from the attachment option present at top as that starts up your smartphone’s default camera app. 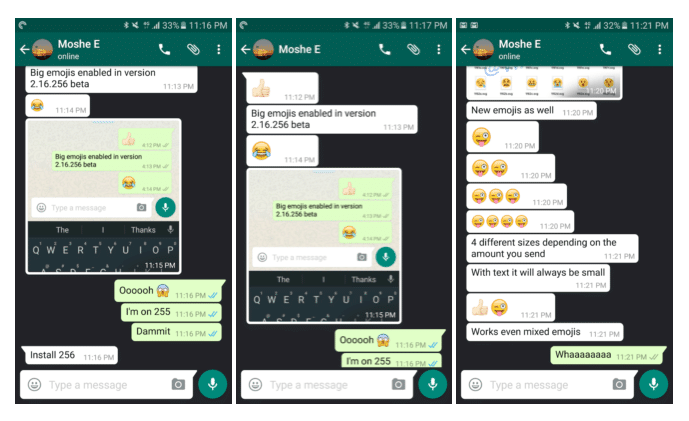 But what’s more interesting is the inclusion of a feature called Front Facing flash where-in the display of your smartphone lights up bright while taking a selfie. This is nearly similar to the Display Flash feature which Apple adapted last year with the iPhone 6S, albeit a software based implementation of the same. Apart from that, the beta build now comes with an option to add image drawing and stickers over photos clicked using the WhatsApp’s default camera. In fact, you can even type text over the same, thereby giving your personal touch to the image in every possible way.

Also Read: WhatsApp is Now Installed on 95% of Indian Smartphones

Apart from that the update features a markedly larger emojis. So whenever you send a message along with just an emoji and no text, the emoji will automatically enlarge to distinguish itself from the crowd. The in-text emojis however remain same as before. Besides, the red heart shaped emoji is now larger than ever. Even bigger than now enlarged emojis. 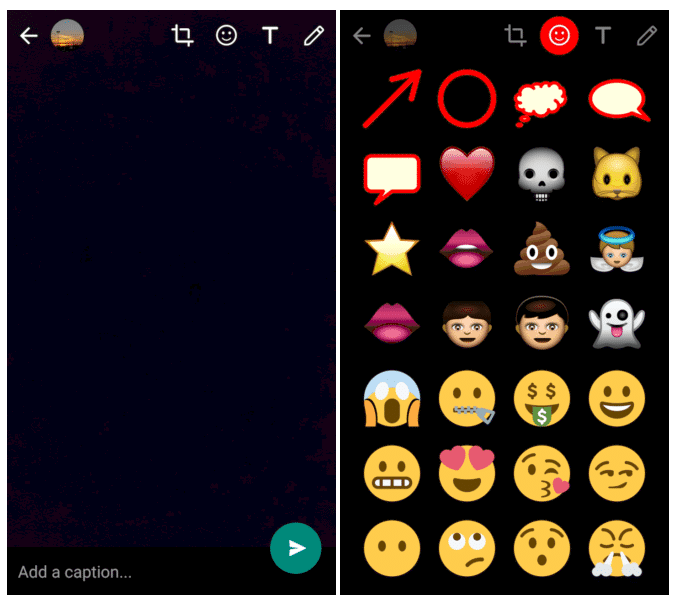 WhatsApp is also letting users send Telegram links across, after having blocked the same a few months back. To check out the new features personally, download the v2.16.263 directly from ApkMirror.