The first thing I noticed after installing Allo is that how hard Google has tried to keep the application as minimal as possible. The home screen is merely a list of your chats with a button hovering on top of them. Also, the search engine giant finally realized that a messaging app should have a search option (I’m looking at you, Hangouts). But Allo at the same time isn’t as straightforward and conventional as one would think at first glance. It integrates Google’s more conversational and contextual Assistant in each and every part of it (except if you’re in the incognito mode). You can fire up natural language queries in any particular chat or directly converse with Google Assistant. You can directly book restaurants while talking to someone, pull out your next calendar entries or emails, play little games, or if you’re really impressed, just ask her (him?) to marry you. 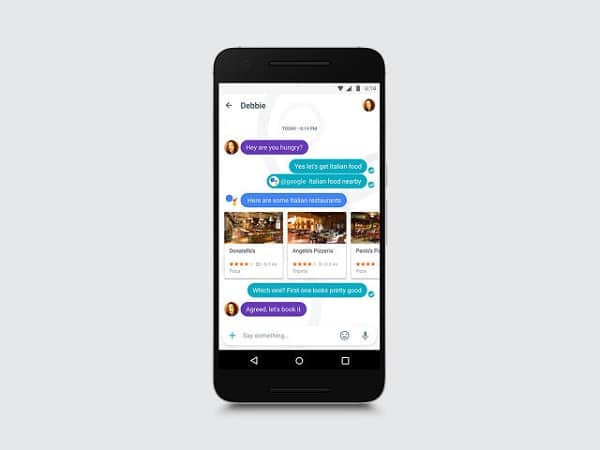 For the layman, Allo also packs almost every other messaging feature such as stickers, doodling on images, voice messages, read/delivery markers, location, WhisperShout for enlarging and diminishing text size and a whole lot more. For some reason, though, there’s no way to know the “last seen” of a person or whether someone is already using Allo or not. Google also baked a smart way to invite others by Instant Apps, read more about it here. Another highlight Google is primarily boasting is “smart reply” that utilizes artificial intelligence to guess what you’re going to send next, for instance, it will suggest “cute dog” if someone sends a picture of their canine. Smart Replies are something Google felt are superior to user privacy and Allo, despite their launch statements, does store chat logs for personal gain.

But that’s not really why Allo will not lift off.

The biggest caveat it currently suffers from is the fact that it’s new and if you have been paying attention, the most crucial factor for the success of any messaging application is the user base. And as of now, Allo has none. So, replies will be inconsistent unless everybody starts using it and it would just feel boring if none of your friends are there. Additionally, Allo is strictly limited to one smartphone – hence, you’ll have to verify your number again if you decide to switch phones. And guess what? There are no web or desktop clients either. Furthermore, while Google has managed to integrate a series of its services directly into Assistant including Gmail and Calendar, locating the information you’re actually looking for is quite tough.

For instance, you can ask the Assistant “when does my flight to Pune leaves?” and it will happily comb through your emails and display the relevant reservation. But ask an indirect question like “when does my flight leave?” and it will show you idiotic web results. This is, in my opinion, Now On Tap all over again. It will take numerous updates for Google to build Assistant to the level where everyone will find it useful. Assistant is still incredibly helpful when it actually works, in a group chat, you can discuss movies, ask about ratings and book tickets straight into a chat. However, everything I just talked can be irrelevant if Google fixes one crucial drawback – Allo’s presence. If you’ve used Allo yet, you might feel Google is purely using it as a platform for introducing and testing Assistant given its constraints and how everything revolves around it, but that’s the point, right? Yes, it is. 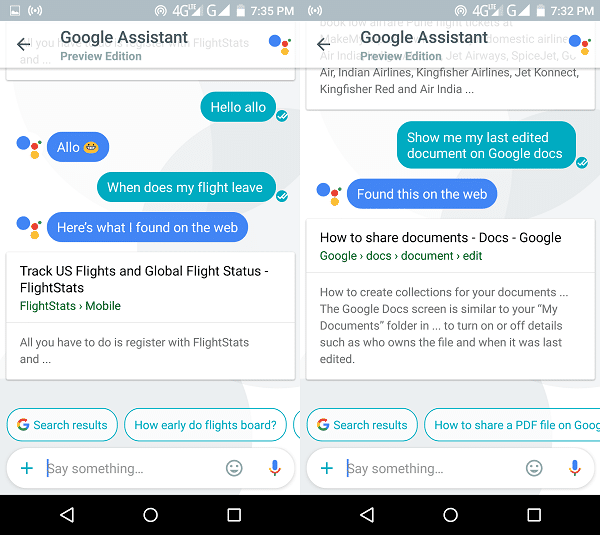 So first and foremost, Google will need to spread it out to each of its services and I’m not talking about solely the unification of information. In a perfect Allo world, if you get an email and right after that, you fire up a chat with that sender, Allo should suggest replies like “read your email”. If you make a calendar entry with the subject “talk to Jack about his new job”, Allo should remind you about that the next time you’re chatting with Jack. Furthermore, in my opinion, there’s no place for Hangouts (why is there still no search option in there?!) in the world where Google is also working on Allo, it needs to vanish or get dissolved with the latter. One might argue with Hangouts’ feature-rich conference calling abilities, but the thing is Google is already dismantling Hangouts, they recently announced that Hangouts On Air has been moved to YouTube Live. Duo has been pitched as a barebones approach to video calling but it definitely needs to combine with Allo, at least as an individual identity capable of processing direct intents.

If Google aims to eliminate every other messaging app powering Billions of users, they’ll need to think harder than just implementing Google Assistant. Allo can even become a default app on Android for SMS and instant messages abolishing the need for two apps to achieve vastly similar functions. Besides, they can’t rely on people to force their every other friend for joining Allo. It eventually needs to evolve as a pathway and communication link to all of Google’s products. Allo and Duo, in no way, can get ahead as standalone applications, nor Google can justify the existence of five other messaging clients they’ve been unable to give up. This is still the very first version of Duo and Allo, we’ll need to wait further to know what Google is planning here. It is going to be an interesting journey from here as companies continue to connect their chat apps with every service and information present on the internet. As WIRED’s David Pierce says, “Chat is the Internet, and the Internet is chat.”

Was this article helpful?
YesNo
TechPP is supported by our audience. We may earn affiliate commissions from buying links on this site.
Read Next
With Football Manager 2023 Touch, Apple Arcade finally has its “killer ...
#Chat Applications #Featured #Google Allo #Opinion