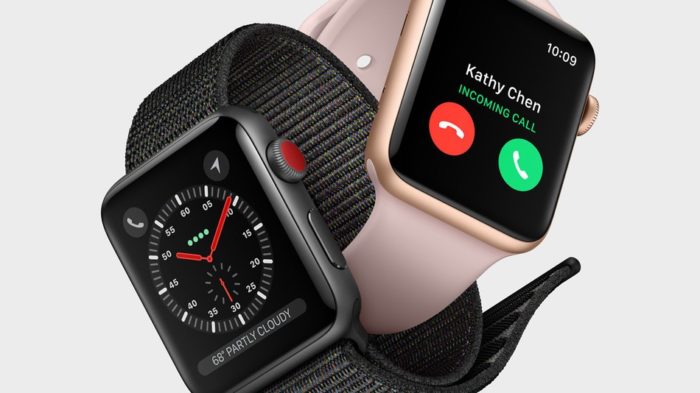 The main highlight of the Watch Series 3 is the built-in cellular connectivity. The Apple Watch Series 3 (GPS + Cellular) makes use of a unique antenna design that utilizes the display of itself as both a transmitting and receiving element for LTE and UMTS. Furthermore, it uses an inbuilt eSIM, which according to Apple is one hundred times small than a traditional SIM card. What’s more interesting is the fact that the Apple Watch Series 3 shares the same number as on your iPhone. So, you don’t need to provide an additional number to family and colleagues.

This essentially means that you can make calls and receive text directly on your wrist. So, you no longer need to carry your iPhone around wherever you go. To mark the presence of cellular support Apple has incorporated a red dot in the watch crown. It also comes with GPS tracker for monitoring your training activities like jogs and cycling.

Sadly, the Apple Watch Series 3 that will be launching in India will not come with cellular support. Instead, Apple will be the launching the GPS only variant in the country. The Cupertino giant hasn’t revealed whether at all it plans to bring the Apple Watch Series 3 (GPS + Cellular) variant to India. That said, one thing is for sure; it isn’t coming anytime soon. And that has much to do with the cellular support for the watch in the country. It seems that Apple needs to make tie-ups with country’s leading network provider before bringing its flashy new tech in the country.

To top things up, the all new Apple Watch Series 3 comes with a faster S3 dual core processor and a W2 wireless chip for charging. Additionally, it comes with a barometric altimeter. The newly designed W2 chip from Apple is said to make WiFi 85 percent faster and both Bluetooth and WiFi 50% power efficient. Alongside that, the new watchOS 4 brings in a number of neat features to the Apple Watch Series 3. It now comes with an improved heart rate app with a deeper focus on fitness and health of the user.

Apple Watch Series 3 is available in two different cases sizes – 38nm and 42nm. It comes in gold, silver, space gray aluminum or space black stainless steel watch cases with a variety of bands. The American electronics firm will, however, launch the Apple Watch Series 3 in all the above colors only in a sports band starting at Rs 29,900. Besides, it will also sell the Apple Watch Nike+ at the same price. Both watches will be available via select Apple authorized retailers starting September 29.

Apple has decided to scrape the price of its Watch Series 1 to Rs 21,900. It will be available in silver and space gray cases only.

Was this article helpful?
YesNo
TechPP is supported by our audience. We may earn affiliate commissions from buying links on this site.
Read Next
With Football Manager 2023 Touch, Apple Arcade finally has its “killer ...
#apple #Apple Watch #Apple Watch Series 3 #india