A few years ago, whenever people wanted to read the news or any sort of online content, they Googled it. Simply typing the topic you were interested in led to an endless heap of article links from all over the world. But that’s a thing of the past. People no longer rely on a search engine for their daily dose of stories. Social networking apps and websites have been dominating as news mediums, whether fake or real, for the last couple of quarters.

This transition isn’t quite limited to social networks either. Various companies like Apple have been attempting to push forward their own news facilitating services. Apple News, for instance, got an in-house editor-in-chief for updating sections like News Editors’ Picks and News Top Stories. Facebook’s enormous user base of more than two billion people allowed it become one of the most influential platforms for promoting content. Twitter has been always deemed as a news-first environment.

Google’s position in the industry, as a result, has plummeted as it didn’t have a successful social network to lean on it. The company did, of course, aggressively pushed Google+ through its other services like Gmail but unfortunately, couldn’t pursue enough users to switch. Eventually, they had to launch dedicated news apps and as you would have guessed, preloaded on the majority of Android smartphones. However, just like their messaging mess, they seem to have lost track of their actions and have begun piling on new ventures without sorting out the existing ones. 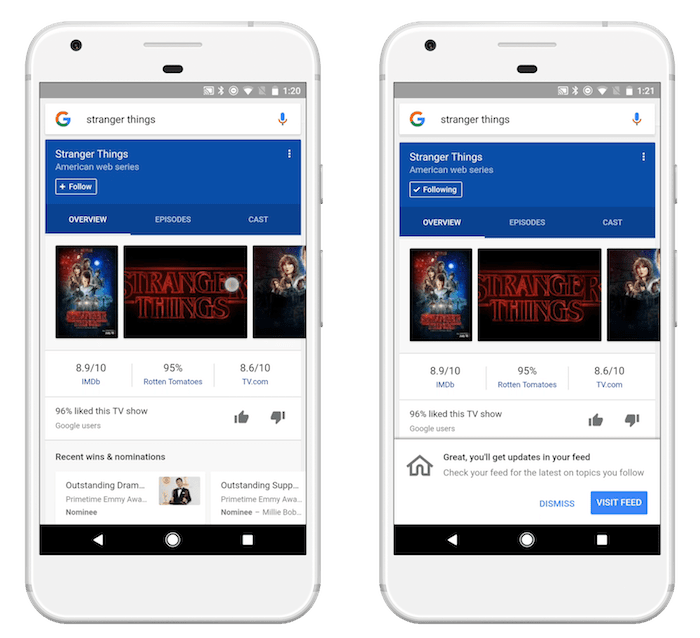 Google currently has four primary mediums for delivering news to your phone – Google News and Weather app, Google Play Newsstand app, Chrome browser’s home screen and the most-recent addition, a personalized feed anchored on the front of their main search app. They even have an entirely new standard for articles online – Accelerated Mobile Pages (or AMP). The company even rolled a complete redesign for the web version of its core news destination.

None of them is a social network, hence, readers don’t benefit from any kind of community or culture for discussions. Second and more importantly, no one actually uses the news-specific apps out of these and the others have vastly different purposes which users employ regularly other than reading curated content. Google, hence, faces a similar impediment here it does in the case of messaging apps.

These platforms, if we evaluate individually, work splendidly. The Google app feed is capable of showing exactly what you want to read thanks to its close tight ups with the search engine you frequently use. In addition to that, it lets you follow any topic online without having to deal with any kind of spam. Google News and Weather functions as a no-frills reading app and same goes for Google Newsstand which also supports magazines, however, is on a little heavier side of apps. Google Chrome’s home screen as well takes cues from what you are browsing online and suggests articles accordingly. Therefore, the chance of an error in what the algorithms think of your interests is quite negligible.

Apps are Great, But..

However, people don’t spend a whole lot of time on apps other than messaging and social networks. Even for news, the social networks have progressed a lot. Unless the user wants to read about a specific topic or search for something, only then he/she will use the Google app or Chrome. Even when they do, most users prefer the omnipresent Google search widget instead of launching the app which means the news section is skipped altogether.

Google, therefore, has surprisingly little room to promote its platform now. That could possibly be the motive behind adding a content section to these apps. There’s no doubt in the fact that Google is already brainstorming ideas for overcoming this hurdle. However, throwing everything at the wall and waiting for something to stick isn’t a good idea. It didn’t work with messaging apps and possibly, it won’t here either. However, Google is still the most extensive source for any sort of content and I’m sure the search engine giant will figure this out sooner than later. Let’s see if they are able to come up with a solution before it’s too late.

Was this article helpful?
YesNo
TechPP is supported by our audience. We may earn affiliate commissions from buying links on this site.
Read Next
NothingOS Made Me Realise How Much Overrated Pixel UI Is
#Content #google #news #online #Opinion