If you have ever been vanquished in a steaming argument just because of a silly grammar typo like the aforementioned one, you will love Grammarly’s new keyboard app. It’s only for iOS right now and like its desktop counterpart, it suggests grammatical edits as you type in a chat window or while composing an email. 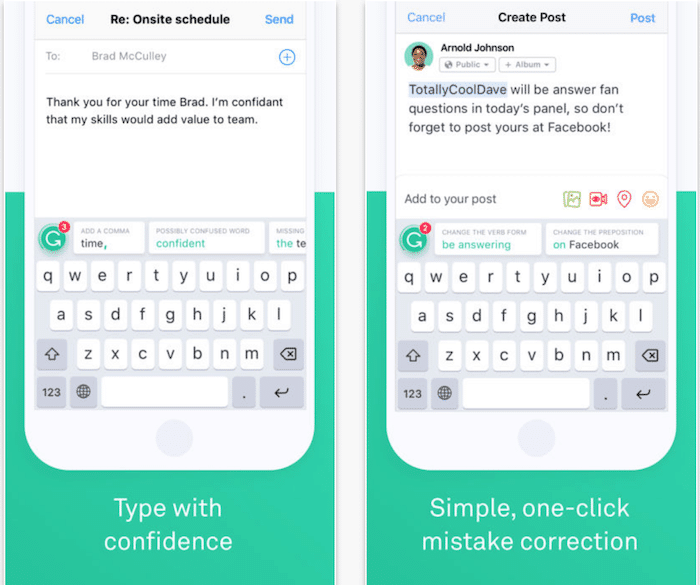 Powered by an artificial intelligence algorithm, the keyboard app also recommends better alternatives for what you’re writing based on the context. If you’ve ever employed their browser extension, you probably already know how well it functions. Apart from fundamental tasks such as detecting errors and check your spellings, Grammarly also scans the entire sentence to suggest more lucid and better-framed substitutes such as changing verb forms and propositions.

“Grammarly’s algorithms not only catch context-specific grammar and spelling mistakes but also the kind of confusing sentences that leave your colleagues (or worse, your boss) wondering what you’re talking about,” the company’s VP of Product Ayan Mandal wrote in a blog post.

Since it’s a keyboard app and not an extension, Grammarly can work on just about any third-party application on your iPhone. Furthermore, the default iOS theme has been kept unaltered. Hence you won’t face any critical delays while the app processes the words. It’s certainly a dramatic upgrade on the current auto-correct mechanism on your phone, and there’s a good chance you’ll never return to the native one after installing Grammarly.

Fortunately, the app is free for both casual and premium users. But to take advantage of their advanced features, you’ll have to shed a few extra bucks for enrolling in their premium package. You can download it from the link down below. While the developers haven’t revealed a proper time frame, an Android version is indeed under development and should be available soon.

Was this article helpful?
YesNo
TechPP is supported by our audience. We may earn affiliate commissions from buying links on this site.
Read Next
Alert! You’re Hiding Sensitive Information From Your Images on iPhone W...
#app #Grammarly #ios #iOS app #keyboard