Xiaomi kicked off its smart TV onslaught in the Indian market by bringing the Mi TV lineup to the country’s shores last month. And like always, their biggest differentiator, arguably, is the price. But Vu, one of the existing players which itself has bet on relatively affordable price tags for propelling its television business, is apparently not too worried about that yet. And to ensure its position remains intact, the company is introducing a new line of smart tellies called ActiVoice. We’ve been spending a few days with the 49-inch variant, the 49SU138 to be exact, here are our initial thoughts on it. 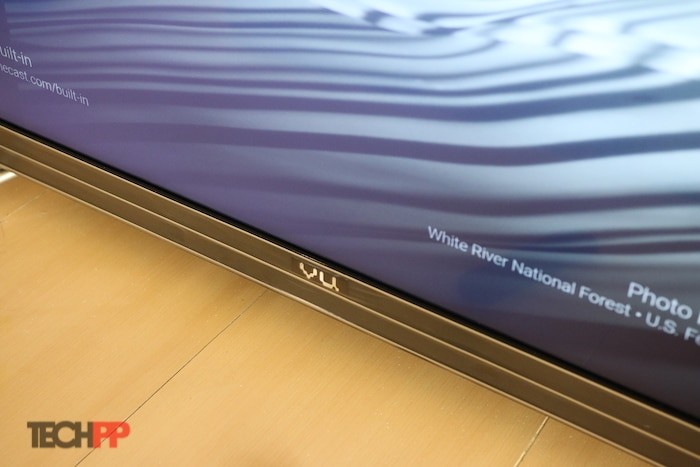 Before diving deep into the details, the first and foremost thing you should know that the Vu ActiVoice isn’t trying at all to undercut Xiaomi. It starts at Rs 36,999 for the 43-inch model and goes all the way up to Rs 55,999 for 55-inch. So, yeah, given the enormous price gap, Vu is clearly is not interested in playing the price card. In fact, the company even went on to say that it doesn’t think Xiaomi is a competitor since its (Vu) offerings reside in the premium range, not the budget. While that’s true or not is another story but the obvious question here is which basket exactly is then Vu placing its eggs in?

There are two, actually. Customer service and Android. The Vu ActiVoice will be readily available on Flipkart so that the buyer won’t have to go through the unforgiving process of flash sales. Second, the smart TV comes with stock Android Nougat instead of a custom skin which essentially means you get all the Google-y novelties like the ability to download apps as well as games from the Play Store, Android updates, OS-wide voice control, Google Assistant, in-built Chromecast support, Netflix, and more. 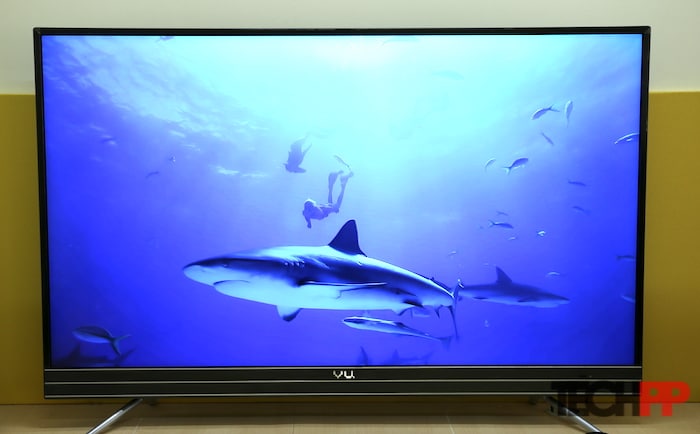 As far as the pixels are concerned, all the ActiVoice variants feature a 4K panel. Unfortunately, there’s no HDR here, something which the Mi TV’s 55-inch model does come with. However, where the ActiVoice series does shine is in the 4K content department. You can play UHD clips from YouTube, Netflix, and other services, unlike Mi TV which, for now, seems to restrict everything to Full HD, except for the raw files you play from your drive.

We found the picture quality on the ActiVoice smart TV to be sharp and vibrant but certainly not the best. While you probably will never notice the lack of HDR, it was significantly apparent when we tried playing compatible videos. The 20W soundbar on the bottom is loud and supports DTS (non-HD) as well as Dolby. The integrated soundbar is loud and at the same time produces high quality output, probably one of the strongest advantages for thia Vu TV over its arch-nemesis, the Mi TV 4. 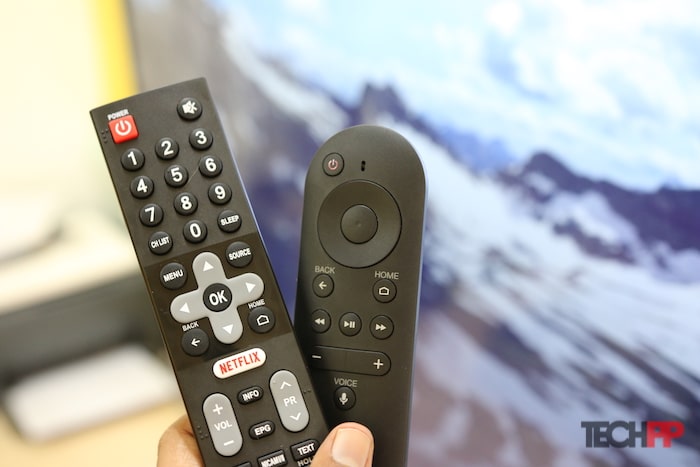 It comes with two remotes — one with the standard button layout (with Netflix button in the middle) and another with a more modern, minimalistic setup. For some reason, we were not able to pair the latter*. As I said, it might be an issue specifically with our unit. One of the concerns I expressed in the case of Mi TV 4 was that the absence of voice search and a regular remote can pull back Indian customers who are still getting used to the smart era. Vu, in comparison, is offering both.

*Update: We finally got the Voice remote to work. We had to manually pair this Bluetooth remote. Once we did, it works like charm and voice search is particularly blessing on a TV. 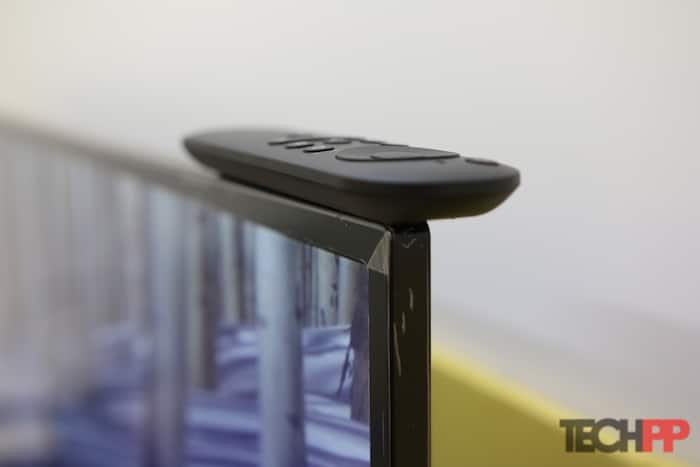 The ActiVoice TV features a rather straightforward design (which Vu likes to call “Piano Black Design”) and the front is not as edge-to-edge as the Mi TV 4. The 55-inch variant is, though, 3 kilograms lighter at 14 kg (14.32kg with the stand). The port selection comprises of three HDMI, an Ethernet, a standard headphone jack, and two USB ports. The table stand and wall mount are bundled with the TV which is nice. 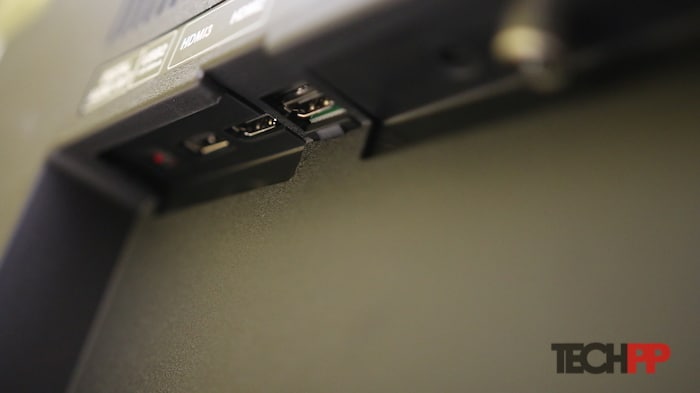 Moreover, it’s powered by an unspecified quad-core processor, 2.5GB of RAM, and 16GB of internal storage of which you only get around 11GB out of the box. The television felt snappy for the most part but there were a few occasional lags and delays within the Android TV interface. However, nothing major enough to be a dealbreaker.

The Android software has its own upsides and downsides. First, let’s talk about the former. The most crucial perk ActiVoice holds, if you ask me, is voice search which even functions inside apps. On the Mi TV, in comparison, you will have enter every query manually through the four-button navigation pad which can be a little annoying. There’s Google Assistant as well, so for compatible services, you can just ask the television to play, for instance, Stranger Things on Netflix. 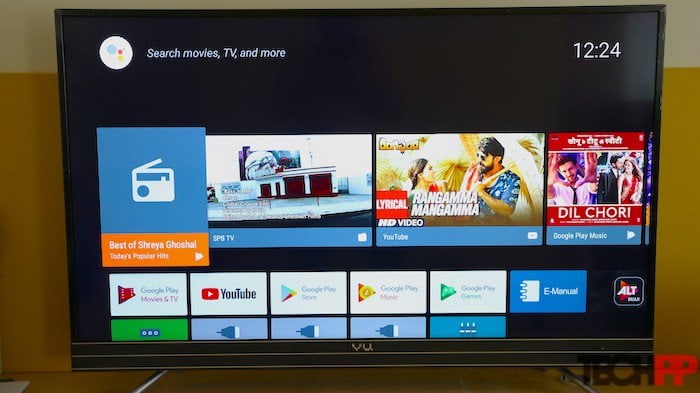 The other cornerstone is the Google Play Store. It houses thousands of Android TV applications and games you can simply download instead of side-loading through an external drive. In addition to that, it has Google Cast built in. Therefore, it lets you project anything from the screen to YouTube clips from your Android or iOS phone. It also allows you to switch streaming resolutions which is oddly missing from the Mi TV. We must specify how it can play YouTube 4K videos in 4K, while Mi TV 4 restricts to FHD, probably because it’s not the official app.

The only letdown of the ActiVoice’s software is the dearth of set-top box integration. Jargon aside, this basically means the cable content won’t sync with the smart interface forcing you to maintain multiple remotes and switch input sources for watching them. Xiaomi advertises this as one of the key highlights of its televisions.

Whether the Vu ActiVoice overcomes the Mi TV challenge will come down to what the Indian customers prefer — waiting for flash sales or paying nearly Rs 15,000 more for instant order and better service. It’s the sort of choice which had eluded the smartphone industry as well a few years later but eventually, Xiaomi’s bet did pay off. Will that formula extend to the television market and will history repeat itself? We can only wait for now. We’ll have more on both the products in the coming weeks, hence stay tuned for that.