“Smoking is injurious to health” is a warning we have heard all too often – before the start of a movie, in the middle of our favorite TV shows, from our elders, and of course, on packs of cigarettes. But even though you might have steered clear from the urge to press a lit cigarette between your lips, there is a high chance that you are still smoking, especially if you are living in a large city, Now, the pollution in most megacities around the world is as dangerous as smoking cigarettes. And now there is an app which tells you how many cigarettes you are smoking even when you really are not.

Sh**t! I smoke, is an application which converts the level of pollution around you and converts it into the number of cigarettes it would take to do similar harm. 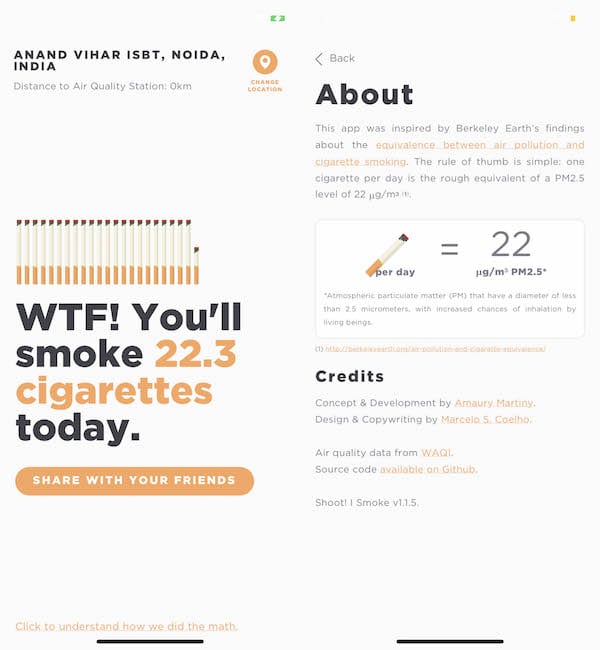 The app uses your location and Internet connection. It collects air quality data from air monitoring centers around you and works out the number of cigarettes that you are or will be smoking as per your location. And it also explains how it does the math, inspired by Berkeley Earth’s findings about the equivalence of pollution and smoking cigarettes, according to which one cigarette a day is roughly equal to (jargon alert) a PM2.5 level of 22 μg/m3.

That number sounds a tad difficult to understand, right? Smogs the mind?

Well, that’s why this app is so good – it simply tells you how many cigarettes you are smoking per day as per your location. You can also manually select a location and see how many cigarettes you would be smoking if you were living somewhere else (most major cities seem to be covered). And that is all it really does – load the app and you straight away see the number of cigarettes you have “smoked” in terms of pollution at your location, with a profanity to boot. That’s it. You can opt to see how the number was calculated too, but the main screenful is all about how much you have smoked today – no hefty numbers or mathematical abbreviations to work out!

It is this simplicity accompanied by some very appropriate graphics (starting from the logo, which is a cigarette shaped like a poop emoji which we think, not only justifies the title of the application but also looks very different and creative) that make the application so good. And well, fun. Yes, we said “fun.” Because “Sh**t! I smoke,” is definitely one of the most entertaining apps to deliver bad news to you.

Little things like the message that appears on the screen, “Loading, cough…cough..” while loading data, the smoke on the screen that comes up with the result, and the sad cigarette emoji that appears on screen when the app is unable to offer result, all add up to make “Sh**t! I smoke” a relatively light and yet impressive app. Some might have their reservations about it, but the swear words in the app play just add to the impact and put your unintentional smoking habits in perspective – some might smile at the profanity, others might be shocked by it, but in either case, it has served its purpose of attracting your attention. 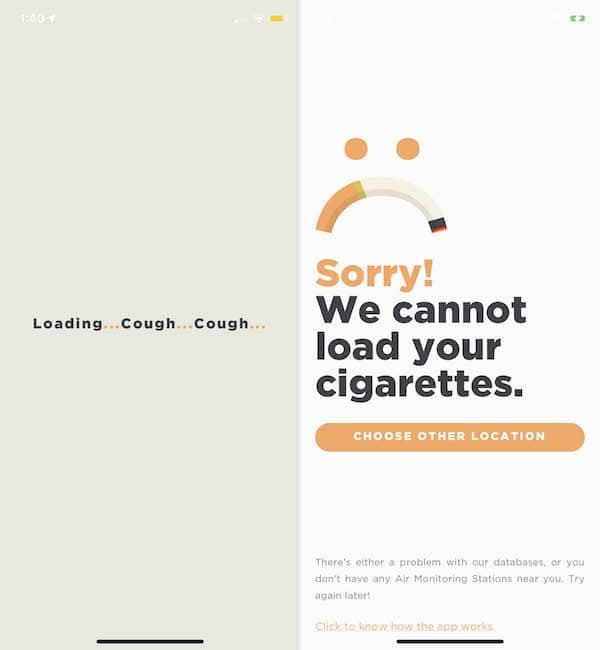 The data shown by the app is very direct and quantitative and at the same time, easy for just about anyone to understand. Telling people that the pollution around them is equivalent to smoking a certain number of cigarettes is certainly simpler than talking of particulate matter and the like. We cannot stress how important the sheer simplicity of the app is – it only tells you how much harm the pollution has done to you in terms of cigarettes smoked and does not clutter things with weather details or hand out information on measures you can take to inhale less smog or anything of that sort. It just tells you about the kind of environment you and your family are living in, swears a bit, and leaves the rest up to you.

And it is free too. With no ads. On Android and iOS.

Was this article helpful?
YesNo
TechPP is supported by our audience. We may earn affiliate commissions from buying links on this site.
Read Next
Voila AI Artist: Cartoon Yourself with the Power of AI
#app review #Pollution #Sh**t! I smoke