The Reno 6 Pro 5G is the latest device in Oppo’s flagship Reno series.
The phone comes with a very striking design, featuring Reno Glow, and also packs in a very respectable spec sheet, with quad cameras, a Dimensity 1200 processor and 65W fast charging.
At Rs 39,990, the Reno 6 Pro 5G goes up against some formidable competition. But packs enough to stand tall against it.

The Reno series has been Oppo’s flagship in recent years, showcasing the brand’s design and innovation muscle. And it has forged a formidable reputation for itself in the premium segment of smartphones. Therefore, the Reno 6 Pro 5G comes with a truckload of expectations on its sleek shoulders. And with some terrific competition in front of it. How well does it handle both? Let us find out. 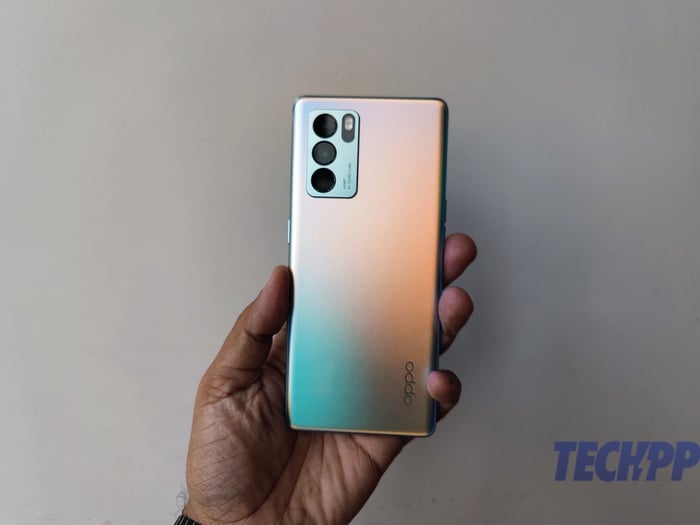 Turns on the style

The Reno series has been known for its snazzy design, and the Reno 6 Pro 5G carries this tradition forward. We got the Aurora edition (there is a Stellar Black one too), and we think it will catch a lot of attention, with its ability to change colors depending on the angle at which light falls on it. The back has a matte, slightly grainy-textured finish which Oppo calls the Reno Glow, and is remarkable for its ability to stay comparatively stain and smudge-free. Some might find the Aurora edition a little on the loud side, but there’s no denying the fac

No, it is not a militantly different design, with a back and a front that both curve to meet each other and a slightly sticky-outy rectangular camera unit in the back, but it is very sleek and relatively compact (160 x 73.1 x 7.6 mm) in these times of massive devices – it is actually smaller in height and at less wide than the Mi 11 Lite – and is reasonably light at 177 grams. The front is a 6.55-inch curved display with a tiny punch hole in the left corner. This is a sleek, stylish, and very well-crafted phone, although minus any official dust and water resistance.

Packs in the specs 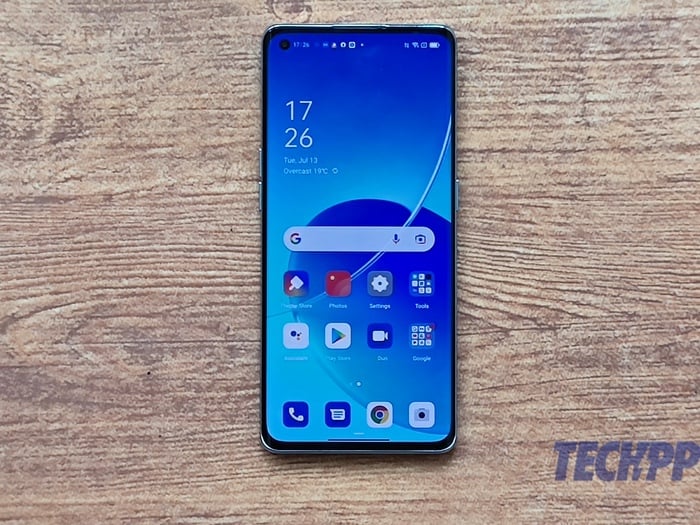 Beneath that striking exterior is a very respectable spec sheet. The 6.5-inch display is a full HD+ OLED one and is impressively bright and colorful, and has a 90 Hz refresh rate as well as a fingerprint scanner beneath it. The device is powered by a MediaTek Dimensity 1200 chipset, which is supposed to match the Qualcomm Snapdragon 870 and is backed up by a massive 12 GB of RAM and 256 GB of storage (no expandable storage, but we doubt too many will need it with this sort of onboard storage). That RAM can be extended to 19 GB using Oppo’s exclusive RAM expansion, which borrows from onboard storage, although we really do not know what most users would do with that much RAM. 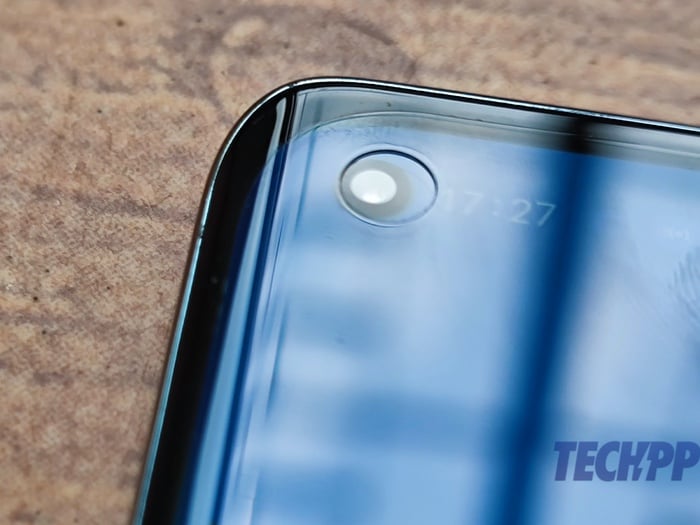 This being an Oppo device, there is some impressive camera hardware with a 64-megapixel main sensor, an 8-megapixel ultrawide, a 2-megapixel macro, and a 2-megapixel monochrome camera with a color temperature sensor at the back and a 32-megapixel camera in front. There is no OIS, though. Also missing are a 3.5 mm audio jack and stereo speakers, although the phone does come with support for Dolby Audio. There is a 4500 mAh battery inside that slim frame, and it comes with support for SuperVOOC 2.0 fast charging and a massive 65W charger in the box. On the software side, the phone comes with Oppo’s Color OS 11.3 running on top of Android 11. And of course, as its name indicates, it supports 5G connectivity, so that does make it future proof to an extent in that department. 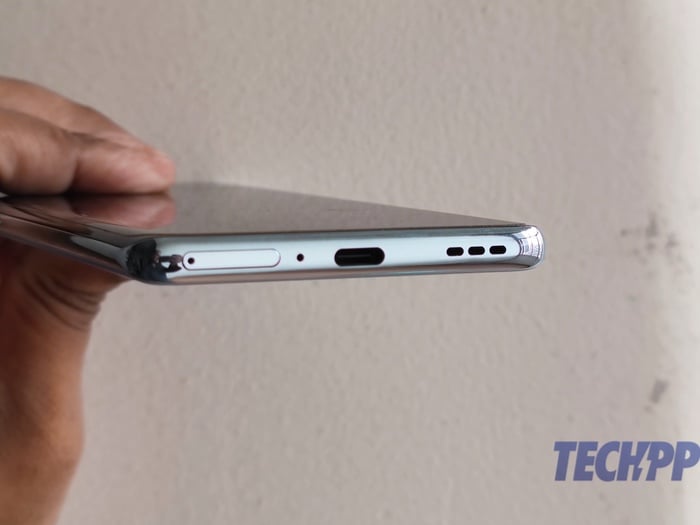 It all works very well too. The OLED display is not the brightest we have seen but is quite a good one if a little on the oversaturated side. It is great for watching videos and shows, although the absence of stereo speakers does take a bit of edge off the experience (the single loudspeaker is impressively loud, that said). Gaming is generally a good experience too, with the phone generally being able to handle high-end titles like Call of Duty and Asphalt without any noticeable lags or hassles. Yes, we did feel that the games did not run quite as snappily as they did on the OnePlus 9R, but unless one is seriously pixel- and lag-peeping, the performance will suffice for most gamers.

Multi-tasking is very smooth, with the Reno 6 Pro being able to easily handle multiple applications and tabs without breaking into a sweat or even heating up. The in-display fingerprint scanner works remarkably well, although it does not sway us from our belief that the best place for a fingerprint scanner is on the side of a phone on top of the power/display button! 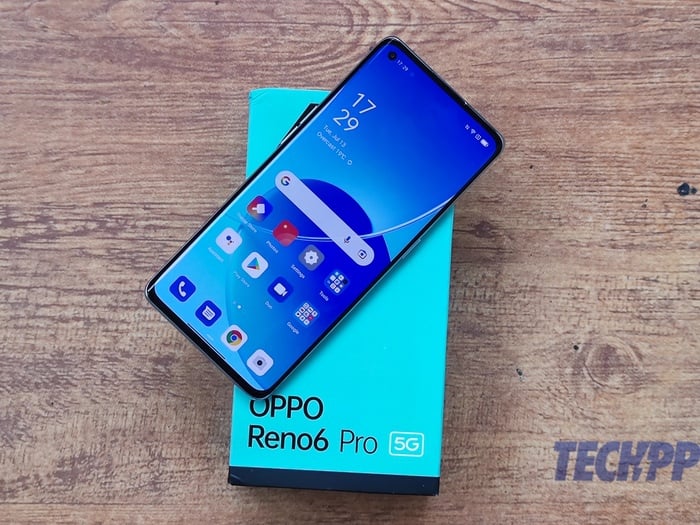 The Color OS 11.3 interface can seem a little cluttered initially, but it runs smoothly and comes with some excellent features. Yes, there are some additional apps out there, but we did not really mind their presence. Battery life stands at a day of normal usage (with the refresh rate at 90 Hz), and believe us, that is more than ample when you consider that the 65W charger in the box gets the phone from 0 to 100 in little more than half an hour. This is one of the fastest charging phones out there. Period. 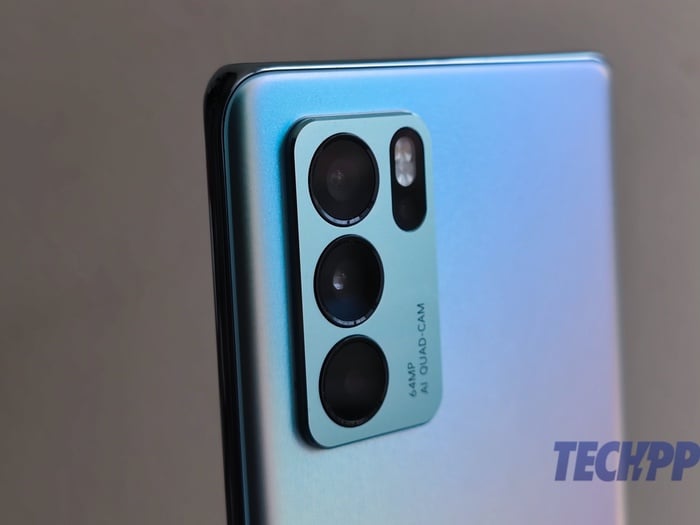 A rather odd aberration in the Reno 6 Pro 5G experience is the camera. We say “odd” because the Reno series has been known for its camera innovation (remember that amazing shark fin innovation on the original Reno?). Now, this does not mean that the cameras (on the Reno 6 Pro are not good. Far from it, they are very good, and we would easily consider the images and videos they take as among the best in their price segment.

However, they do not quite live to the hype that surrounds them and does not seem too much of a step ahead of what we saw on the Reno 5 Pro. Colors seemed to get a little too bright at times (that color temperature sensor?), and we often found images to be a little on the darker side. We also had a few mild focusing issues, although these were inconsistent. Focus tracking worked superbly, but the much-talked-about Bokeh mode in videos does not quite work to the extent we expected – the subject often got a little blurred. Video in normal mode, however, is very good. Low light photography was also impressive, with colors being surprisingly vibrant even at night (again, we wonder if the color temperature sensor had something to do with this). Truth be told, we did not miss OIS much, although we would have loved to see it here. 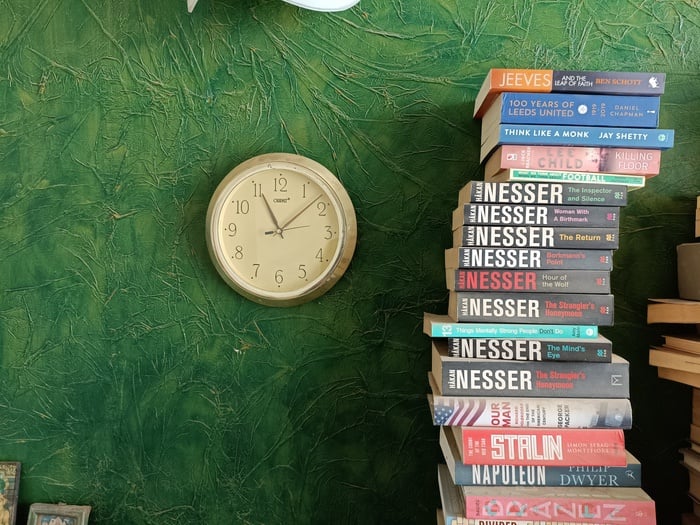 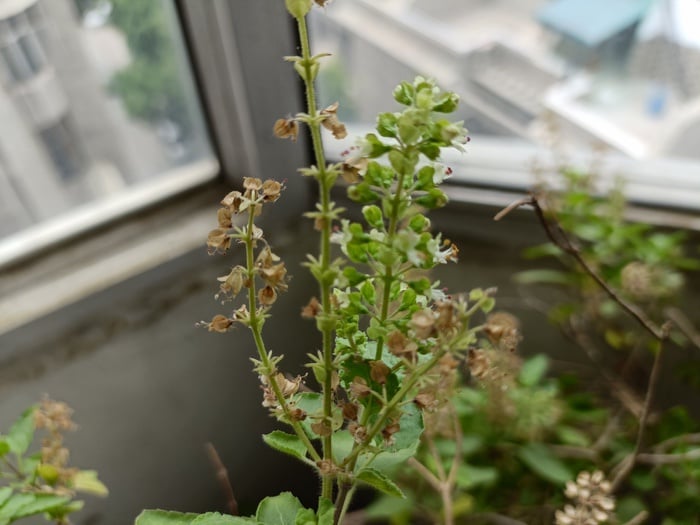 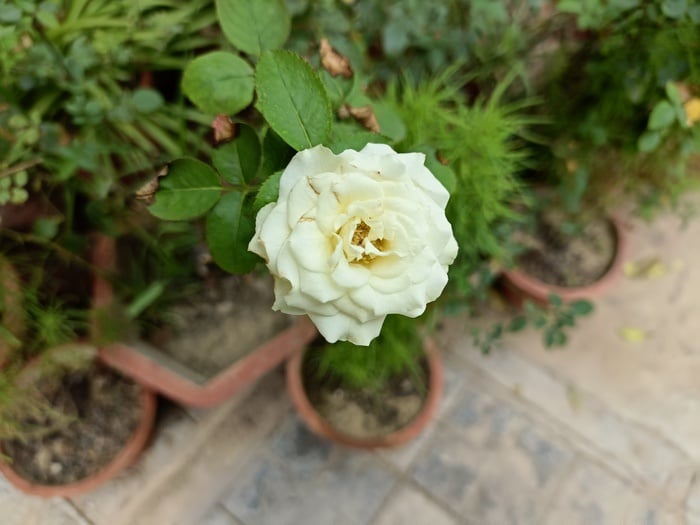 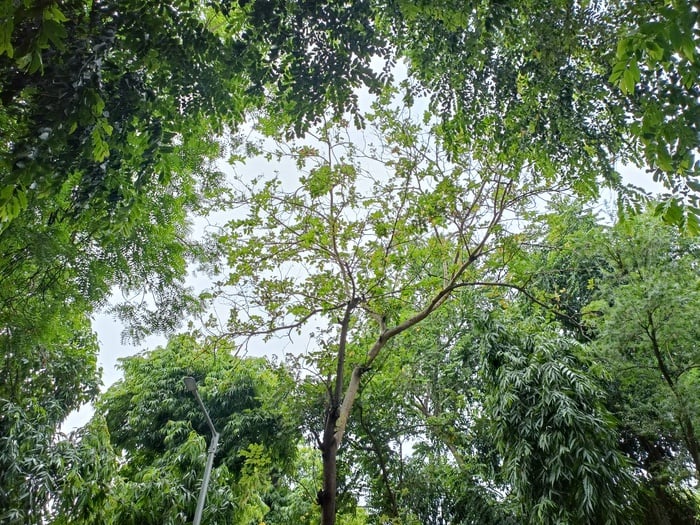 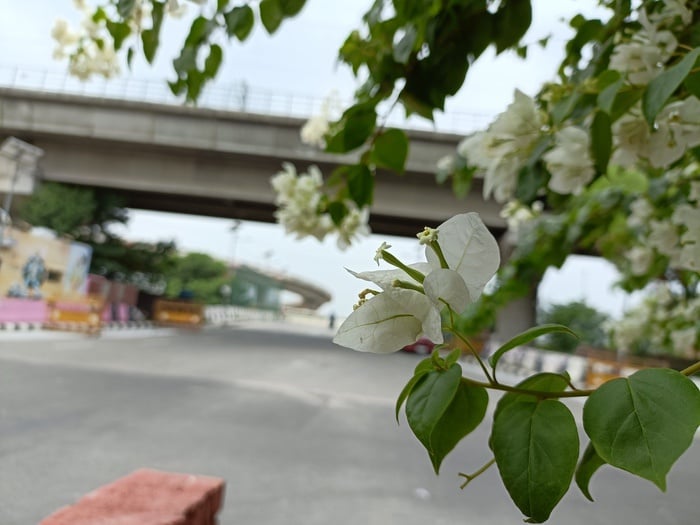 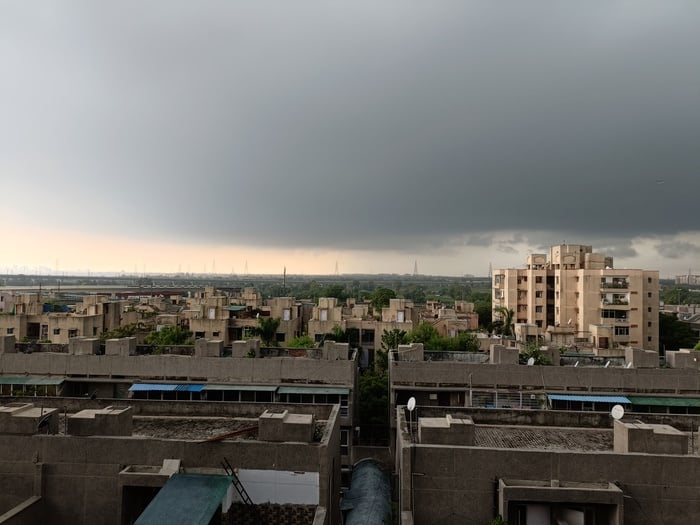 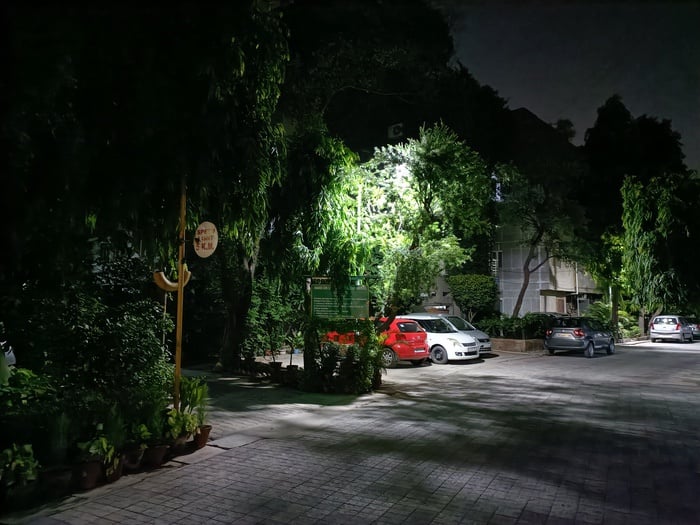 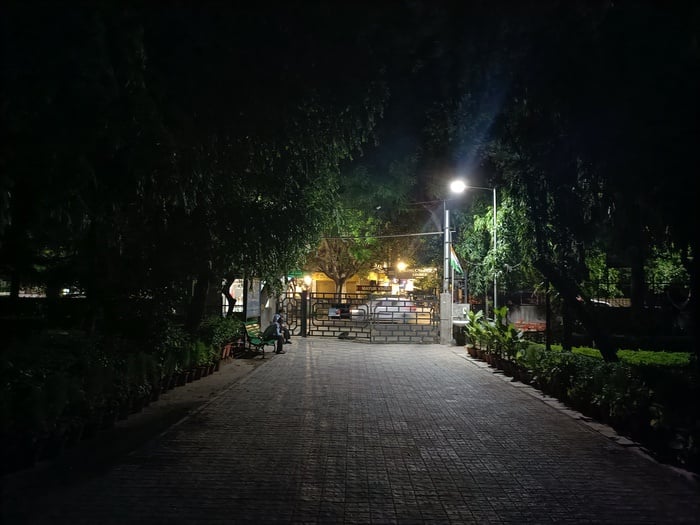 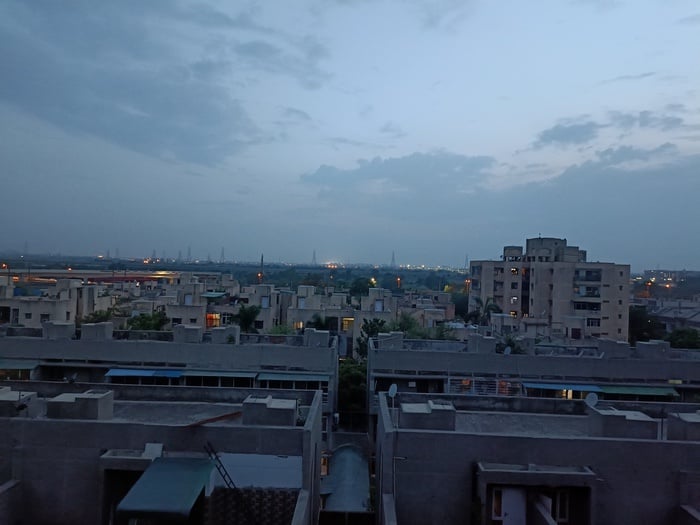 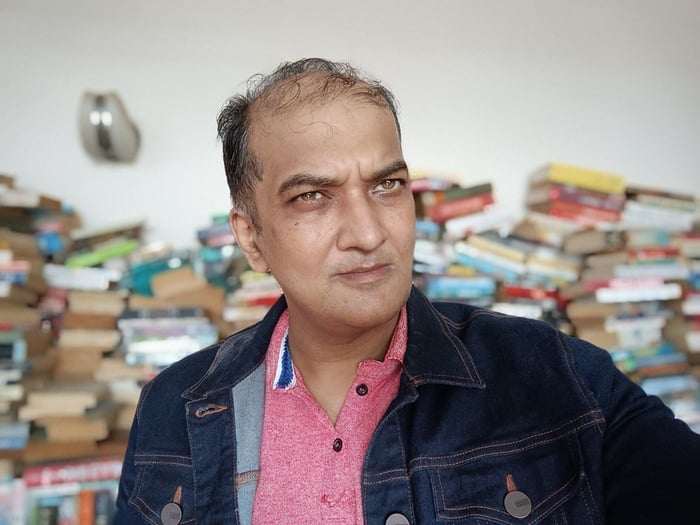 The 32-megapixel selfie camera takes some very good selfies, although you do get “beautified” even when you turn off all effects. Speaking of effects, there are plenty of them around, letting you do a lot with both videos and images. These are very good cameras, make no mistake, but the hype works against them by raising expectations (shades of what happened to the OnePlus 9 series). Approach them with an open mind, and you will get some great snaps and videos. As good as any and better than most in its price segment. Mind you; we are not too convinced by the 2-megapixel macro sensor, which we suspect exists to make up camera numbers.

Taking on some serious Oppo-sition 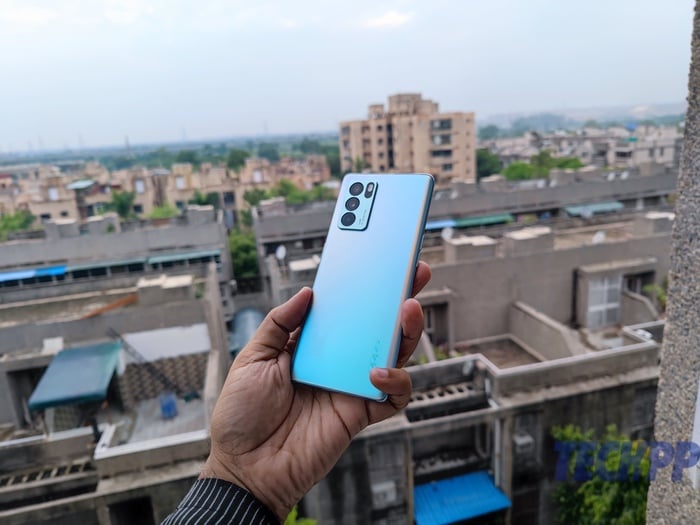 All of which makes the Oppo Reno 6 Pro 5G a great option for anyone looking for a phone that combines smarts and substance. The phone is a head-turner and is generally a smooth performer. Its price of Rs 39,990 might seem a bit on the higher side, but if you factor in the fact that it comes with 12 GB RAM and 256 GB storage at that price point, the Reno 6 Pro 5G becomes a very good option for anyone wanting to turn on the style without compromising on the performance front.

It does face challenges, though. The most prominent of these are likely to be the two super affordable Snapdragon 888 devices in the market – the Mi 11X Pro 5G and the iQOO 7 Legend, both of which start at Rs 39,990, albeit with lower RAM and storage. There are also the two Snapdragon 870 contenders, the Vivo X60 and the OnePlus 9R. And, of course, there will be those who will be tempted by the Mi 11X 5G, which brings a decent design and a Snapdragon 870 at the same price, as well as the OnePlus 9R 5G, which also has the same processor and OxygenOS as well.

It is quite a line-up, and yet the Reno 6 Pro does not get overwhelmed by it. Yes, spec hunters and geeks might not get too attracted to it, but most mainstream users just want a phone that looks premium and performs well. And the Reno 6 Pro does both remarkably well.

Review Overview
Was this article helpful?
YesNo
TechPP is supported by our audience. We may earn affiliate commissions from buying links on this site.
Read Next
iQOO 11 5G Review: Does It End Your Quest for the Ultimate Smartphone?
#5G #oppo #Oppo Reno6 Pro #review