OnePlus has quite a rich history when it comes to special edition devices and partnerships. The brand has released various “limited edition” devices in partnership with some really popular brand names that target the fanbase of those brands and act as an incentive for them to buy these particular devices. Whether it is the OnePlus 5T StarWars Edition, the OnePlus 6 Avengers edition, the OnePlus 6T McLaren edition or the recently launched OnePlus Watch Harry Potter edition, OnePlus has a thing for special edition devices and hence it comes as no surprise that the company has now introduced a new special edition smartphone. 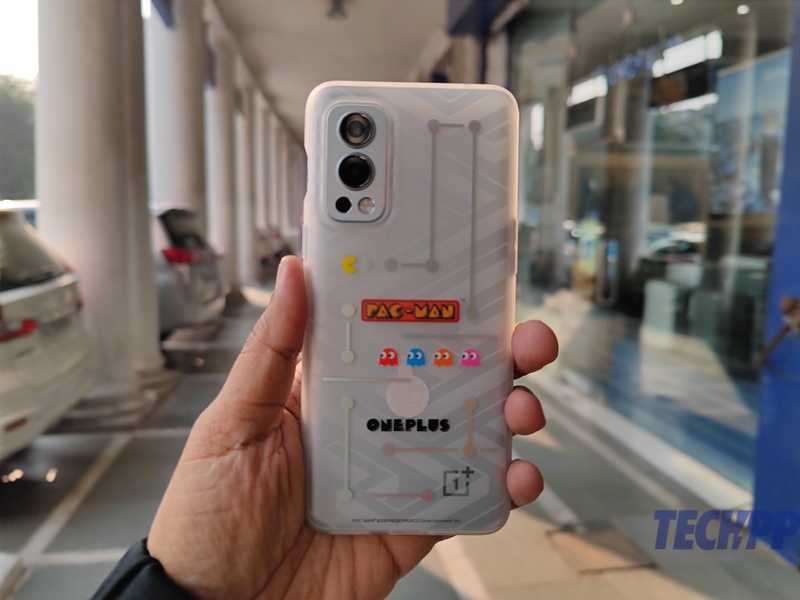 But this time around, the company has partnered with Bandai Namco to add a nostalgic, arcade-ial touch to the OnePlus Nord 2. In addition, it has launched a special edition of the OnePlus Nord 2 — the Pac-Man edition.

The special edition of the OnePlus Nord 2 is very visibly Pac-Man edition and hence distinctly different from the regular OnePlus Nord 2. The phone comes with a dual film back where the outermost layer carries the very eye-catchy and obviously Pac-Man-inspired design. It has pellets all over the back while the tiny, pellet munching Pac-Man sits right below the camera unit. What is also very evidently different is the placement of the OnePlus logo, which is on the lower right side of the back. The alert slider on the side is also in a very Pac-Man blue!

While all of these are quite loud and proud design additions, OnePlus has added some very nuanced and clever design elements to the Nord 2’s back as well. The brand has used phosphorescent ink on the inner layer of the back to imitate the iconic maze design of Pac-Man. This only becomes visible at certain angles in normal light, but it becomes quite apparent in the dark, as the maze pattern glow thanks to the phosphorescent ink. This is one design element that makes the phone’s appearance quite cool. 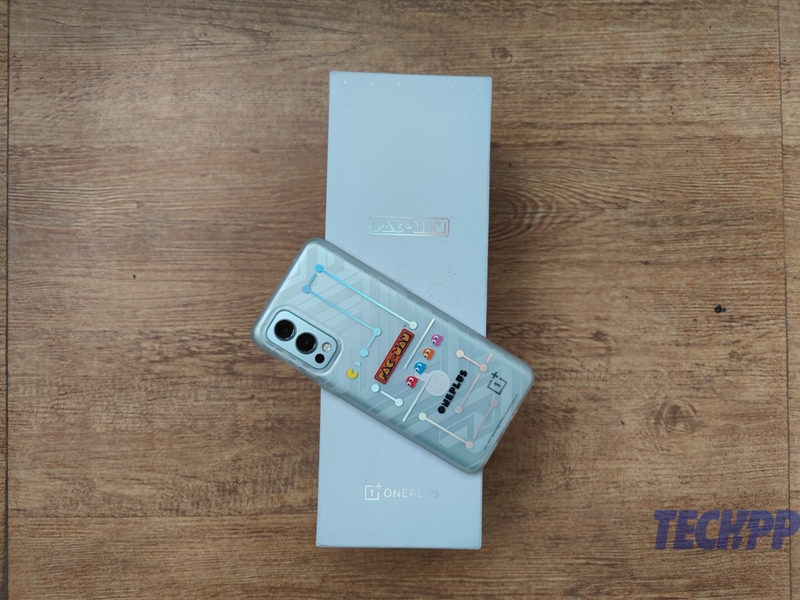 The back does not glow quite as much as we would have liked, but it certainly glows and definitely acts as a party trick. Unfortunately, what’s also hidden is the Pac-Man branding on the phone. Mentioned on the left side of the camera unit, the “OnePlus X Pac-Man” branding is extremely subtle, and it takes a very close look at the back to find it.

The phone’s front is the same as the regular OnePlus Nord, but the phone comes with a Pac-Man-inspired translucent case. The case adds another well-defined Pac-Man touch to the exteriors of the phone. It has the iconic OnePlus logo, the ghosts and cookie munching Pac-Man with the maze. And well, there is also a do-it-yourself phone stand complete with Lego bricks and cute game icons – you can get it free of cost with the phone. OnePlus really has its accessory game on point with this device.

The UI says “Pac-Man,” and loudly too 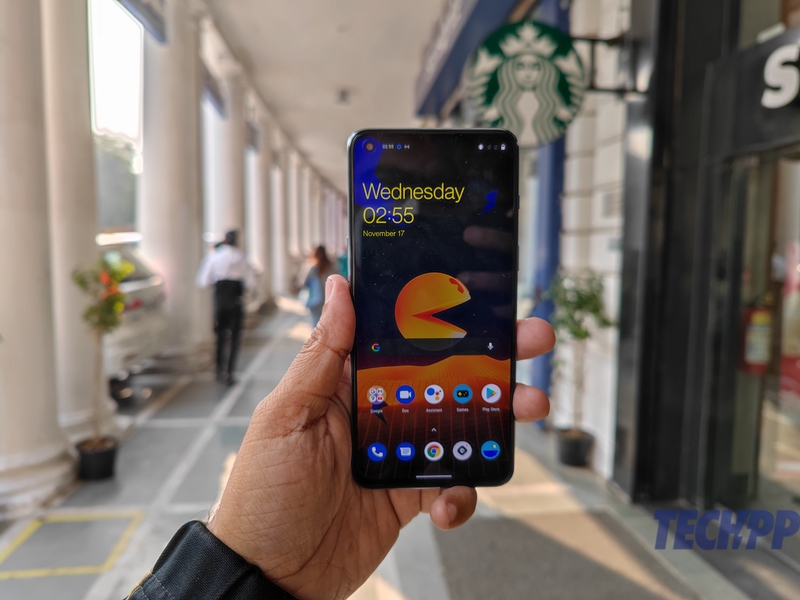 Apart from the external touches, OnePlus has made quite a few significant changes in its interface as well, which is more than we can say for its other special edition devices. Yes, in the past, OnePlus special edition devices always had some relatively trivial UI touches like wallpapers and sound effects, but they did not really scream “special edition.” However, the Pac-Man edition certainly speaks loudly, if not screams, those words. The phone boots up with Pac-Man gobbling up the name of the phone, giving the words the pellet-gobble treatment.

Along with some (predictable) Pac-Man wallpapers, OnePlus has also changed the look of its native apps’ icons to a very retro, pixelated look inspired by vintage 4-bit games. Even the in-display fingerprint scanner on the phone comes with a Pac-Man touch with the Pac-Man icon on the inside and little icons running around in a circle while the phone reads your fingerprint. Similarly, putting the phone on charge shows Pac-Man munching on pellets. OnePlus also mentions many other Pac-Man-oriented contents like ringtones and stickers that can be unlocked by completing different challenges on the phone itself. 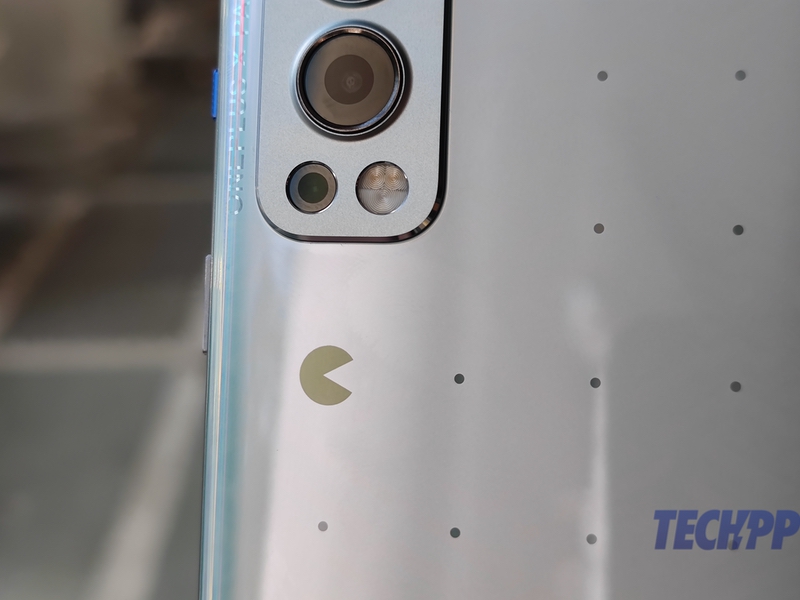 These might not seem very significant additions, but Pacman definitely is more front and center in this phone than any other theme has ever been on a OnePlus special edition in our experience. And that makes the phone not just a fun device to use (especially for Pac-Man fans) but also gives it a very distinct identity in terms of usage.

OnePlus has kept the specs and number of the phone the same as the regular Nord 2. The smartphone runs on Mediatek Dimensity 1200 AI processor but comes in a single 12 GB RAM and 256 GB storage variant. The phone also has the same 6.43-inch full HD+ fluid AMOLED display with a 90 Hz refresh rate, a triple camera unit with a 50-megapixel main sensor, and an 8-megapixel ultrawide and a 2-megapixel monochrome sensor. There is a 32-megapixel camera on the front, and the phone is backed by a 4,500 mAh battery that comes with support for OnePlus’ 65W Warp Charge Technology with a 65W charger in the box. The phone also comes with support for 5G and runs on Android 11 topped with OxygenOS. 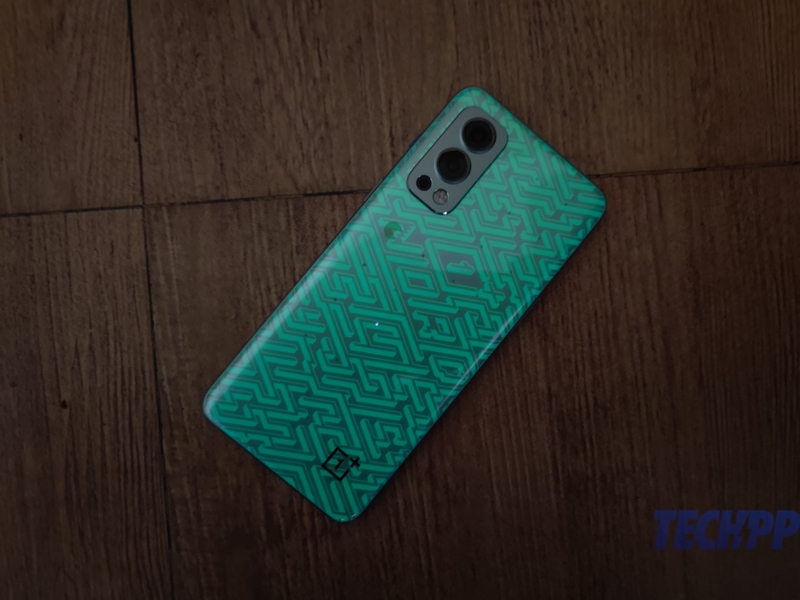 This essentially means that there will not be much difference between the regular OnePlus Nord 2 and the OnePlus Nord 2 Pac-Man edition in terms of performance. The phone pretty much works the same as the regular Nord 2, which is not bad considering how great a performer the OnePlus Nord 2 is and what a dent it has managed to make in the mid-segment range since it was launched.

What will be different is your day-to-day experience on the phone. The little pops of colors and the Pac-Man feels will definitely stand out. What’s also different is the price tag. At Rs. 37,999, the OnePlus Nord 2 Pac-Man edition is a tad more expensive than the regular Nord 2 priced at Rs. 34,999, the 12 GB/ 256 GB version, while there are other less expensive versions of the regular Nord 2 as well.

That said, if you wish to step out of the mundane world of smartphones and add a pinch of fun to your experience and have the budget for it (duh!), the OnePlus Nord 2 Pac-Man edition could well be the phone for you, especially if you are a Pac-Man fan (so many of us are). It is certainly the best addition to OnePlus’ special editions. Mind you; we hope the brand does not Settle with this name – there are so many other games waiting to gamify phones!

Was this article helpful?
YesNo
TechPP is supported by our audience. We may earn affiliate commissions from buying links on this site.
Read Next
OnePlus Nord Watch vs Amazfit GTS 2 Mini New Version: Which One Should You Buy?
#oneplus #OnePlus Nord 2