If you use your iPad for work or entertainment regularly or plan on doing so with your new iPad, there will be times when you’ll stumble upon something interesting on its screen. Something that you might want to come back to later or share with someone.

When this happens, it’s always wise to take a screenshot of the screen to capture its content and save it on your device. However, depending on what iPad model you own, there are a few different ways to take screenshots on the iPad.

Let’s talk about all of these different methods that you can use to take a screenshot on your iPad.

Using hardware buttons is the most obvious way of capturing a screenshot on the iPad. However, based on the iPad model you own, the button combination for screenshotting can vary.

1. How to Take a Screenshot on iPads Without Home Button

If you own one of the recent iPad models that come without a Home button, here’s how to capture the screen on it:

Press the top/power button and the volume up button or volume down button simultaneously. And then, quickly release both buttons.

Following this, your iPad’s screen will now flash for a second, and you’ll hear a snap sound, indicating that the screenshot is captured successfully. Plus, you’ll see a thumbnail at the bottom-left corner of the screen for quick access. Tap on it to edit or delete the screenshot.

2. How to Take a Screenshot on iPads With Home Button

If you happen to have an iPad model with a Home button, you can capture screenshots on it as shown below:

Hit the top/power button and the Home button on the iPad at the same time. Then, quickly release both these buttons.

Instantly, your screenshot will be captured, and you’ll see its thumbnail on your screen, just like you did in the previous section.

Related: How to Turn On/Off Silent Mode on iPhone Without the Switch

While using hardware keys to capture the screen works fine, it can be difficult for some people to get the timing (and the combination) right. This is where the AssistiveTouch functionality comes in handy.

For those unaware, AssistiveTouch is an accessibility feature from Apple to help users who cannot touch the screen or press the buttons on the device. It’s available on iPhone, iPad, and iPod touch, and you can do all sorts of things, like adjust volume, lock, screen, restart your device, and even screenshot the screen with it.

Follow these instructions to use AssistiveTouch for taking screenshots on your iPad.

First, you need to assign the screenshot action to AssistiveTouch. Here’s how to do it:

Once it’s done, you can capture the screen as shown in the following steps:

Click on the captured thumbnail to view or edit it.

Aside from being an excellent stylus that can do a wide range of things with, Apple Pencil also offers the ability to capture screenshots on your iPad.

So if you own one of the Apple Pencils—and have a compatible iPad—you can use it to capture screenshots instantly. Here’s how:

Again, your iPad’s screen will flash, and you’ll hear a shutter sound, alerting you that the screenshot is taken, with a thumbnail at the lower-left corner. Click on this thumbnail to view, edit, or delete the screenshot directly.

Related Read: How to Take Screenshots on Mac

How to Take a Full-Page Screenshot on Your iPad

Until the release of iPadOS 15, if you wanted to capture a screenshot of a long list of items on the screen, you had to take individual screenshots and stitch them together using an app.

However, iPadOS 15 solves this problem. Now, when you take a screenshot on your iPad, you end up with two types of screenshots: single page and full page. Do note, however, that the full-page screenshot is automatically captured when you’re on pages with a long list of items.

Considering you’ve captured a full-page screenshot, tap on its thumbnail at the bottom-left corner. Now, click on the Full Page tab at the top to reveal the entire screenshot. 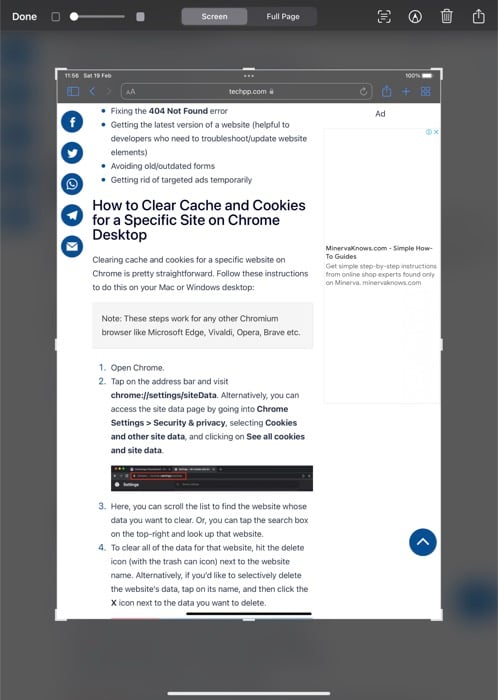 Use the mini-map style scrollbar on the right to move up and down the screenshot. To save it, hit Done and choose Save PDF to Files. Finally, please select the location where you want to save the screenshot and tap on the Save button to save it.

Using the three different screenshot methods on this guide, you should now be able to take screenshots on your iPad easily. And moving forward, this should help you capture your iPad’s screen on all those important moments when capturing the screen’s content matters the most.

Besides, with the screenshot captured, you can now annotate it, adjust its opacity, copy the text in the screenshot image, or share it directly with others over AirDrop or any other app.

How to Take iPad Screenshot?

Taking a screenshot on an iPad is pretty simple. You can do it in one of the three ways like we have explained above:

How to Take Long Screenshot on iPad?

How to turn off iPad screenshot sound?

There are no dedicated settings to turn off iPad screenshot sound. But there are some workarounds if you really want to disable. Unlike iPhone, iPads don't come with the 'silent switch' which helps you quickly mute all sounds. On iPad, you have to manually reduce the sound to zero to mute iPad screenshot sound.

Is there another way to screenshot on iPad?

Most people know about using the Home button+volume button to take a screenshot. If, for whatever reason, you are looking for an alternative way, enable AssistiveTouch by going to Settings -> Accessibility. Click on Double Tap under 'Custom Actions' and choose Screenshot.

How do you screenshot on iPad without Home and Power button?

Was this article helpful?
YesNo
TechPP is supported by our audience. We may earn affiliate commissions from buying links on this site.
Read Next
How to Use Your iPad as a Second Display for Your Mac
#apple #how to #how to guide #ipad