Apple introduced Universal Control at WWDC 2021, exciting Mac and iPad users with the possibilities it would bring to their daily workflows. A year later, as part of the latest macOS and iPadOS releases – macOS 12.3 and iPadOS 15.4 – Universal Control is finally live and available to Mac users.

As the name suggests, Universal Control allows you to control multiple Apple devices connected to a Mac with a single keyboard and mouse/trackpad. This makes it easier to work with multiple devices on your desktop and eliminates the need for multiple keyboards and mice.

What is Universal Control?

Universal Control is a macOS feature that unlocks the ability to control iPad and Mac, linked together, using the same keyboard and mouse. It lets you connect an iPad or another Mac to your main Mac and work across all of them without needing another pair of keyboards and mice.

For instance, with Universal Control, you can link an iPad and a MacBook together and use the MacBook’s keyboard to input text into apps like Notes, Safari, etc., on the iPad; or use its trackpad to navigate the iPad’s screen.

Besides inputting text and navigating the iPad, Universal Control also lets you drag and drop files between devices, granted the apps support drag-and-drop and the file type. Similarly, you can also use the Universal Clipboard feature to copy text from one device and paste it on another.

Universal Control works with Macs and iPads. It requires you to have at least one Mac in your setup, with as many iPads and other Macs linked to it.

Here’s a list of all the Mac and iPad models compatible with Universal Control.

Universal Control is a system feature that links a Mac and iPad together—letting you use them side-by-side—and allows you to control them with a single keyboard and mouse. It’s kind of similar to Barrier, a KVM software that lets you control multiple computers with one keyboard and mouse.

With Universal Control, you can, for instance, have a MacBook Pro, along with a couple of iPads kept on either of its sides, on your desk, wherein you can use the MacBook’s trackpad and keyboard to work on the iPads by swiping to either side of the screen.

Other areas where Universal Control can come in handy include the ability to move items using drag-and-drop, copy-paste items between devices, and gesture support for easy navigation.

Sidecar, on the other hand, is a relatively old feature. It enables you to use your iPad as a second display for your Mac. To do so, you can either mirror your Mac’s display or extend it to the iPad for more screen estate. Unlike Universal Control, Sidecar only allows you to use one iPad on a Mac and is quite limited in terms of functionality.

To put it simply, you use Sidecar when you want to view Mac’s content on another display, whereas you use Universal Control when you want to work on your Mac and iPad simultaneously with one keyboard and mouse.

How to Enable Universal Control

Universal Control has a few other requirements aside from a compatible device. These include:

Follow these steps to enable Handoff on your Mac and iPad, if it’s disabled:

When you’ve covered these bases, go ahead and turn on Universal Control using these steps:

How to Connect Mac and iPad Using Universal Control

With Universal Control enabled, you can now link your Mac and iPad and start sharing the same keyboard and mouse between them. Here are the instructions you need to follow:

At this point, you should’ve linked your Mac and iPad, and a dot, indicating the cursor, should appear on the iPad screen.

You can now use the mouse/trackpad of your Mac to navigate the iPad screen. Do note; however, that scrolling isn’t supported on many third-party mice, so you’ll have to use arrow keys on your keyboard to move through a list.

Similarly, you can use your Mac’s keyboard to type text in an app on the iPad. To do this, make sure the dot cursor is on the iPad screen, and then click on the text field and type out your text using the keyboard.

When you move the cursor over to the iPad, there are a bunch of trackpad gestures you can use to navigate around the iPad’s screen. However, if you’re using a third-party mouse, you can’t use them.

Instead, you’ll need to use the following gestures to perform a lot of basic navigation actions on your iPad:

If you want to change the arrangement of your linked iPad or Mac with respect to your main Mac, you can do so from your Mac’s Display Preferences.

For this, make sure the devices are linked with Universal Control and go to the Display Preferences on your Mac. Then, click on the connected iPad or Mac screen and move it around the main Mac in your setup. 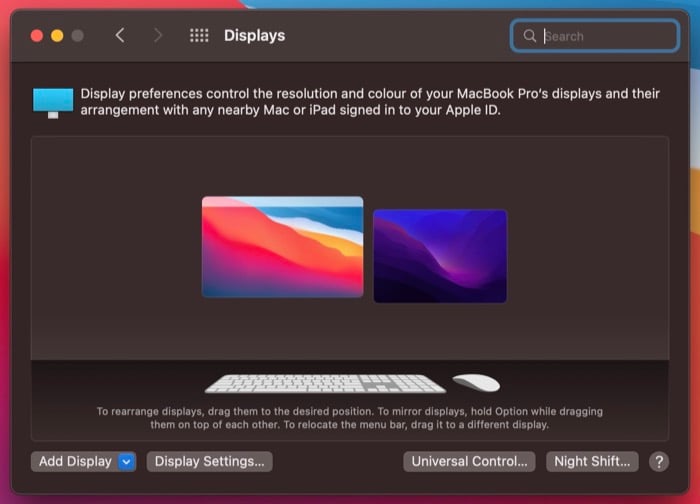 When you’re done using your iPad or Mac in Universal Control, you can disconnect a connected device in any of the following ways:

If, for some reason, even after following the instructions in this guide you’re still unable to link devices over Universal Control, you can troubleshoot it with these solutions:

Universal Control makes it extremely easy to share your Mac’s keyboard and mouse with an iPad or another Mac, so you can control multiple devices without needing separate peripherals for them at your desk. This guide should help you get started with Universal Control. And subsequently, you should be able to use it more effectively and get the most out of the feature while multitasking between your Mac and iPad.

At the time of writing this guide, while Universal Control is live, it’s still in Beta, so you might experience some issues when, say, you’re linking the devices, copying text, or dragging-and-dropping files.

FAQs About Using Universal Control on Mac and iPad

Is Universal Control only on M1 Macs?

No, Universal Control isn't just limited to M1 Macs; a bunch of other Macs—released in 2016 and later—are also compatible, granted they are running on at least macOS 12.3. Refer to the guide above for the entire list of compatible Macs and iPads.

Does Universal Control work with third-party keyboards and mice?

Yes, Universal Control works with third-party keyboards and mice. However, it's important to note that these mice will require you to use different gestures to perform navigation operations on the iPad. We've covered these gestures in the guide above.

No, Universal Control is an iPad- and- Mac-only feature. It isn't available for the iPhone, so you won't be able to share a single keyboard and mouse to interact with your iPhone.

Does Universal Control work on all iPads?

No, Universal Control isn't supported on all iPads. It's only available on the following iPad models:

After this, you can slide over the mouse cursor to the edge—where you've placed the other Mac—and push it past the edge to get it over to the iPad's screen. Once there, you can control the other Mac using the same mouse. Plus, you can also use your keyboard to input text and drag-and-drop items between the two Macs.

Was this article helpful?
YesNo
TechPP is supported by our audience. We may earn affiliate commissions from buying links on this site.
Read Next
Best Places to Buy Refurbished MacBook or Mac [2023]
#apple #how to #how to guide #ipad #iPadOS #ipados 15 #MAC #macOS #macos monterey