Marketing is a universal art, if I may be allowed to call it that way, because it’s something that touches and it’s required by almost any other segment in any industry. As mobile addicts, we’ve started to develop an interest in how marketing is done in the mobile world and as a result, we’re going to remind ourselves of several interesting events, including actual product launches and successful selling campaigns.

At the end of the day you should notice the advantages of employing an intelligent marketing team and that no matter how modest a device is, selling figures can be boosted by a smart presentation and the other way around.

Samsung and the Galaxy S4 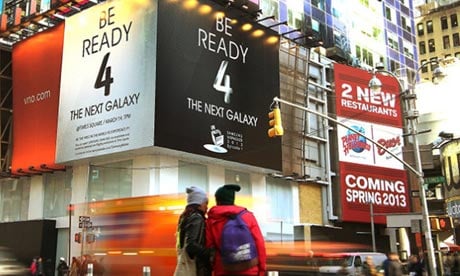 The latest Galaxy smartphone has been successfully launched through several countries since its official announcement in New York City. Back then, Samsung hired an entire orchestra to stage a theatrical performance, in which actors displayed each important feature of the blazing-fast smartphone. Though many found the performance silly, it was aimed to inform the entire world how well Samsung can perform and how the phone can help users each day.

Later on, Samsung took the show to Britain, where a concert was held in the honor of the fourth generation Android king. This may seem like a pile of money wasted on the young, but who wouldn’t come to a free concert to listen to free music, while being informed about Samsung’s brightest creation. The Korean company took advantage of the chance and made most of it.

The story continues with a rather surprising move for those unfamiliar with the matter; while introducing the Galaxy S4 handset in Romania, Samsung flew two units with a helicopter and presented them to the local press on a roof-top, in a James Bond style. Not a lot of money was spent for this gig, but the news was picked up by several publications and produced quite the media tide. Thus, even more exposure.

And who can forget plugging in the Galaxy S3 launch with London Olympics 2012? That was a masterstroke as well. 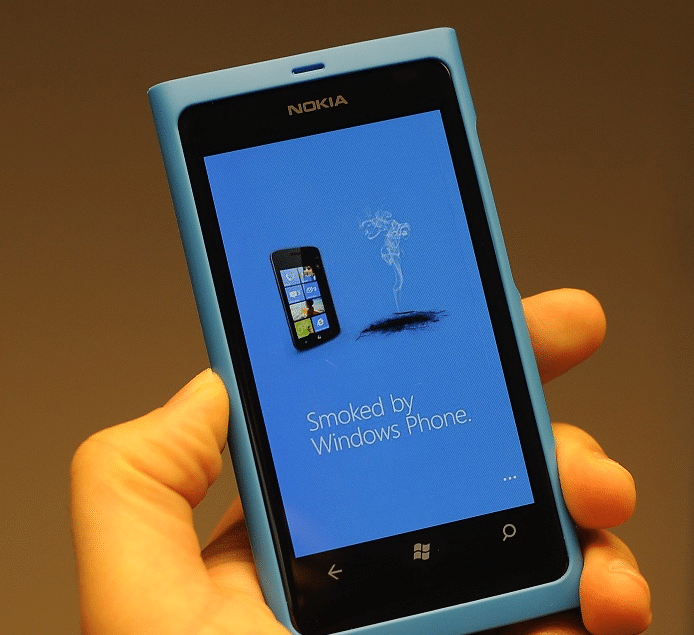 I’m more than sure that you’re already acquainted with Microsoft’s growing efforts to promote Windows Phone, even though they have dimmed in the last period. Back in the days, when the first generation of bright Lumia devices came out and the 800 was a device with innovative design and promising future, Microsoft came out with the “Smoked by Windows Phone” challenge. Its rules were pretty simple: participants only had to prove that their current handset is faster than a Windows Phone at a specific task, such as taking a picture and posting it on Facebook.

Those who succeeded, got a $100 check but as you may well guess, this didn’t happen so often. Actually, Microsoft won around 98% of challenges, because all of those tasks were handpicked by MS executives to be bullet-proof against other mobile platforms. Thanks to a range of dedicated buttons, Windows phones could out-speed the likes of Android and iOS, creating the beautiful illusion that the targeted phone was better. That’s like saying a Renault van is better than a BMW M5 at carrying cargo – it’s true, but we’re not interested only in that.

Interestingly, the challenge created quite the impact, mostly because several Microsoft employees took it to the streets of London and each week, more and more users were tempted by this beautiful illusion. Even more, ads with the contest surfaced on TVs and seeing iOS moving slower than WP 7.5 is not a thing you would expect.

Moreover, developers were attracted to create applications for the rather unseen platform with incentives, which was rumored to even hit staggering figures for important names. Thus, Microsoft managed to port some big names on the other side and people started buying more phones.

Sony and the Xperia Z 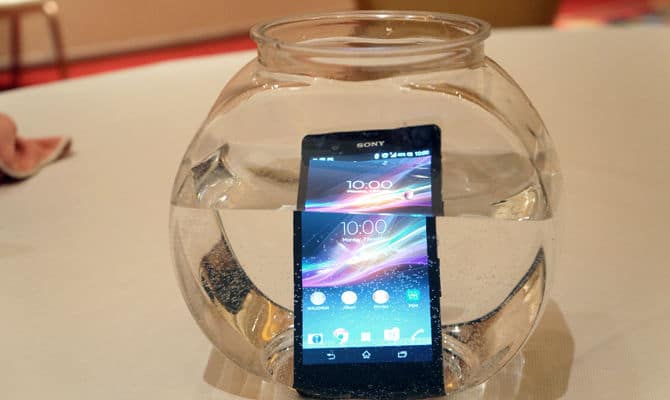 Sony’s Xperia Z, perhaps one of the most promising handsets we’ve seen from this company in the past decade, has a hidden trick underneath its glowing surface. Besides top-notch specs and a display to amaze, the handset is resistant to decent amounts of dust and also, waterproof. That last aspect has been marketed very well by Sony, and in every possible occasion.

This year at CES, Sony had a stylish booth filled with smartphones and tablets to amaze the crowd. The interesting thing is that every ten meters or so, the Xperia Z was presented in a sealed water tank with an exterior aluminum button, which could be used to deep the phone into water. Simple, effective and curious, I should say. I watched how people walked near the booth to simply press that button and see what it does, without even caring about the phone’s technological capacity.

At the official T-Mobile launch, Sony hired two models to take a shower while using the phone. Again, curiosity struck, as more people were interested about the bizarre scene than in any other occasion.

Apple and the first Macintosh Computer 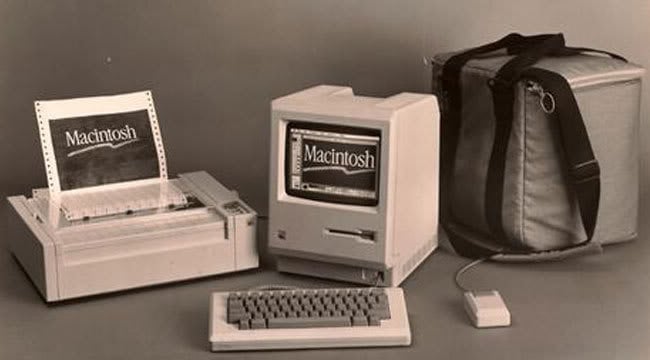 Back in 1984, when the world was pretty much a human mechanism automatized to build components for different industries, Apple came up with a brilliant marketing team and a great idea. The first ad of the first Macintosh computer was entitled 1984, and presented a world of people doing the same things over and over again. Moreover, all the beings present in the ad were somehow controlled by a brain-washing entity, which held speeches everyday.

Marketing their original ideas and showing how much Apple differs from other companies, the firm took the form of Anya Major, a heroine which breaks the bounds of mind slavery by trowing a heavy hammer in huge display that was broadcasting the “master”. The video simply ends with a message, stating how Apple will change the world with this new computer.

The ad was quite impressive, successfully managing to plant the seed of curiosity inside human minds and to appeal to all those that were bothered by their daily routine. Even though the commercial is pretty old and people did not have access to advanced tools, we’ve selected this entry for the imagination part.

Apple and the first iPhone

Back in 2007, when Android was not even released to the market, people needed a phone to do all those important things that we now call basic: find a restart quickly, map your way through cities and dial people you find online in just a few actions. Well, the first iPhone came with all of these and a lot more, but its success could have been smaller, if Apple had not used a brilliant marketing crew.

First of all, the iPhone ad was broadcast over national television and the simple, clever ad featured above was followed by several others, presented on TV and in major cities. Even though the video itself is not pretentious, it showed people exactly what were they missing and in that current market, where the competition was formed pretty much of bulky Nokia & Motorola phones, the iPhone was a sure hit.

After release, the campaign continued with a bald move. AT&T was the only US carrier permitted to sell the smartphone, an exclusivity which the former Cingular paid big bucks for. Although this may seem as hurtful for sale numbers, it did exactly the opposite, forcing people that were with Verizon or T-Mobile at the time to switch networks just to get it. It intrigued buyers by making the chase harder.

Once the iPhone made his way through the hands of several people, most of them saw it as a bragging tool, one which they could use against friends or relatives. I dare to say that this factor managed to increase sales as no other element, mainly because it was something born from the human nature, and something that persisted even through the times of the latest generation. 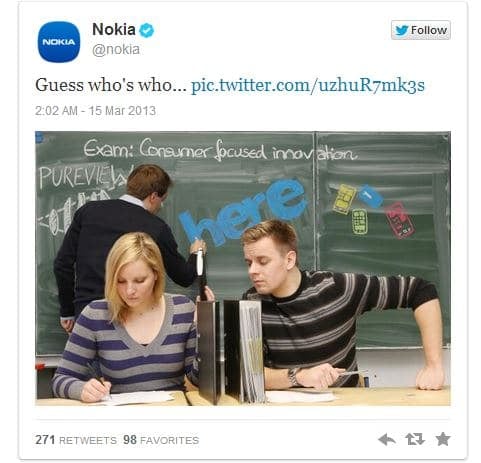 Besides specific occasions, intelligent marketing people also chose to present devices using specific features, which they know will highlight an important aspect of the phone and usually, one that outwits everything on the market. For example, Nokia now touts the newest Lumia line as having the best camera for low-light scenarios. While this is certainly true, some people usually stop at the first three words of that sentence and then spread the word.

On the other hand, companies also know when to disapprove certain statements. For instance, when the Galaxy S4 was launched, it came with wireless charging. Nokia immediately took advantage of the occasion called Samsung a copier, because they were the first company to introduce wireless charging in a retail handset and a screen which works even with gloves on.

Samsung did the same thing with Apple when they launched the iPhone 5, in a not so subtle-manner. While the iPhone 5 was still unannounced, a rather brutal commercial appeared online, showing how Samsung fans enjoy their new Galaxy S III and mocking those who stay in line several days for a phone which basically, promised so few improvements. It was not a nice thing to do, but Android fans enjoyed it and I am sure that the video turned some heads in the Apple camp as well. The video can be seen here.

Was this article helpful?
YesNo
TechPP is supported by our audience. We may earn affiliate commissions from buying links on this site.
Read Next
Samsung Galaxy Fold 4 Tips and Tricks: Get the Most Out of Your Phone
#marketing #mobile #nokia #samsung #Sony