Google today officially introduced a redesign for one of the most widely employed web services — Gmail. The new overhaul brings a modern and advanced set of features to the email platform. The majority of these additions are borrowed from the other Gmail platform Google launched years ago and forgot to update midway — Inbox. We agree it’s a lot to take in. Therefore, here are the bazillion things (actually, ten) Google has added to this hefty Gmail update.

1. A Fresh Coat of Material Design

Of course, the first thing you’ll notice as soon as you land on the new Gmail is the redesign. As the leaks suggested, it revamps all the core Gmail elements with a new, sleek look. However, the essentials are still there where they were before. All Google has done is added minor changes to make Gmail seem friendlier and well, less email-like.

For instance, the icons have been tweaked, you can now check the attachments without opening the mail, and the left pane which accommodates folders now has circular backgrounds. This, in fact, is part of Google’s forthcoming upgrade for Material Design itself. We’ll learn more about that next month hopefully at the company’s annual developer conference.

The Gmail redesign also comes with a new sidebar on the right which holds tabs for quickly accessing your entries from Google Calendar, notes from Google Keep, and tasks from Google Tasks. You can edit and even add new events right from the inbox. The entire drawer is retractable. Therefore you can minimize it. In addition to that, the tabs are compatible with drag and down so that you can simply move emails over to, for instance, Google Tasks and create a new task. There’s also a plus button which allows you to add more compatible services.

The new Gmail also brings something called “Confidential Mode”. As you can probably guess from the name, the tool will help users who want to be extra cautious about how their emails are accessed. “Confidential Mode” will, for starters, prevent recipients from sharing the email’s content. Once turned on for a specific message, the user won’t be able to copy, download, forward, or even print it. In addition to that, it will also let you secure emails by enabling password protection which will be automatically generated through SMS.

Moreover, there will be an option for setting an expiration date on sent emails. Like ephemeral stories, these emails will be automatically cleared as soon as they’re in the inbox for a specific time period. Of course, these features won’t restrict the receiver’s ability to store the email’s content via taking a screenshot or capture a photo from another device. Perhaps, Google might begin disabling the former on its own apps.

One handy feature Gmail has borrowed from Inbox is “Quick Actions”. Hence, whenever you hover over a particular email, it will reveal a bunch of links such as archive, mark as read, and even snooze.

Speaking of snoozing, Gmail now allows you to postpone emails for a later period. This feature as well was previously available on Inbox and most of the third-party clients. You can specifically pick a time and date, and Gmail will accordingly resurface the message. The lack of the ability to snooze emails has remained one of the glaring shortcomings of Gmail, and I’m glad Google will finally address it.

Last year, Google brought smart replies to Gmail’s mobile apps, and it’s now available on the web as well. Smart Replies essentially lets the platform suggest you quick replies with the help of a machine learning algorithm. These are usually short texts like “See you soon” or “Thanks for the reply”. 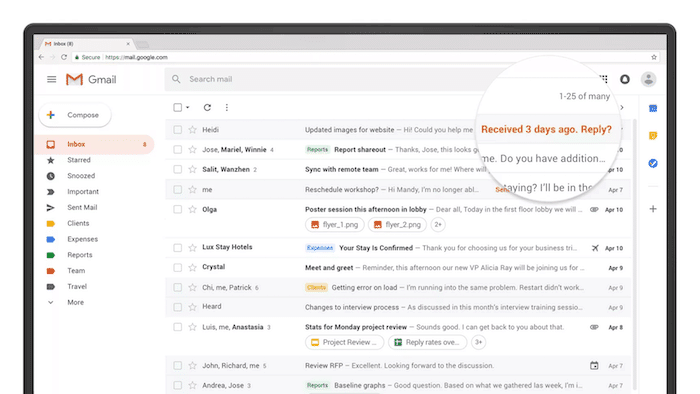 One other AI-powered addition to Gmail is a nudging feature. Basically, Gmail will try to figure out whether an email you missed is important to you and remind you to follow up automatically sometime later. The new Gmail, as you can guess, is all about these little, intuitive changes which are clearly designed to tackle its competitors like Outlook which up until now, had a much more tempting set of features.

Another aspect where Google is applying machine learning to tidy up your inbox is subscriptions. With the new update, Gmail will track which email subscriptions you regularly attend and which you throw it in the trash. For the latter, it will recommend a neat unsubscribe option.

There’s also a new mode called “high-priority notifications” which will only alert for the emails Gmail thinks matter the most. Obviously, this feature is quite tricky as you could end up missing something important. Although if history is any indication, Google knows machine learning well enough not to mess up. Let’s see how it goes.

Since Gmail is now a progressive web app, it can function entirely offline as well. You can store up to 90 days of emails and even search through them. However, this is not available yet and will be rolled out in the coming weeks.

Was this article helpful?
YesNo
TechPP is supported by our audience. We may earn affiliate commissions from buying links on this site.
Read Next
How to Fix Google Chrome Translate Not Working
#gmail #google