At its Surface Event in New York last year, Microsoft announced a bunch of devices, which include likes of Surface Laptop 3, Surface Pro X, Surface Pro 7, Surface Neo, and Surface Buds. Of these, while the Surface Neo is the one that managed to garner some attention, there was another device — that follows the same approach — Surface Duo, which also raised a few eyebrows. While the company recently announced that it is delaying the Neo indefinitely, it is now bringing the Surface Duo earlier than it promised. 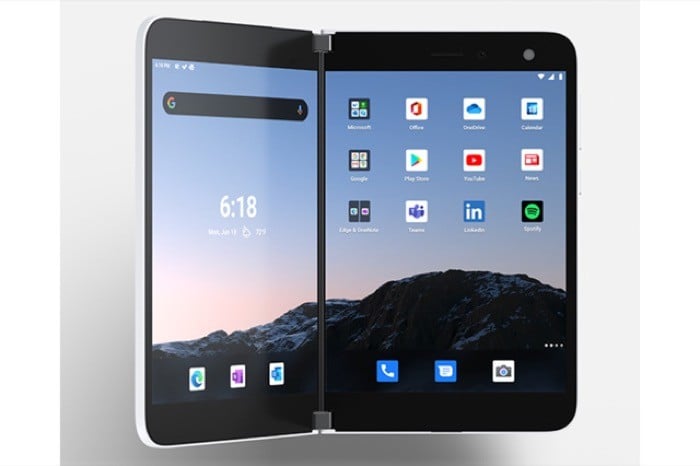 As mentioned initially, the Surface Duo follows a similar design language as the Surface Neo. The device marks Microsoft’s foray into Android smartphones and comes with a dual-screen held together with a 360-degree hinge. Microsoft claims the Duo is its thinnest Surface yet. It comes in at 250g and has a thickness of 4.8mm (when opened).

Under the hood, the Surface Duo runs on the Snapdragon 855 processor, which is almost more than a year old. It is built on the 7nm process and offers clock speeds of up to 2.84GHz. For graphics processing, it has an integrated Adreno 640 GPU. The processor is assisted with 6GB of RAM and up to 256GB of internal storage. It includes a 3577mAh battery to power the internals, which supports 18W fast charging.

On the software side of things, the Duo runs on Android and offers various Microsoft apps and services like Office, Outlook, OneNote, etc.

In the camera department, the Surface Duo comes with a single 11MP sensor with an f/2.0 aperture. The camera can record videos in 4K at 60fps and comes with a bunch of enhancement features and features, such as super-resolution and portrait mode.

The Microsoft Surface Duo carries a price tag of $1399. It is up for pre-order today on Microsoft Store and Best Buy, with shipping starting September 10 in the US. There is no word on its availability in other markets yet.

TechPP is supported by our audience. We may earn affiliate commissions from buying links on this site.
Read Next
How to Install and Use Intel Unison App on Windows, Android and iOS
#microsoft #Surface Duo