TextEdit is the default text editor by Apple on Mac. It is open-source and comes pre-installed with macOS. You can use it to write and edit documents. However, it is limited in functionality when you compare it with other text editors out there. As a result, it is not the best solution to write code, nor is it any good at helping you manage application projects.

So, if you need a more comprehensive experience out of a text editor, you need to look for some of the third-party text editors out there. To help you in this process, here are our picks for the best Mac text editors.

Best Mac Text Editors you should use

Text editors come in various forms, but you can broadly classify them as basic text editors (plain text or rich text) and source-code editors. The difference between both kinds, at large, lies in the functionality and purpose that they serve.

While text editors offer functionalities that solely focus on simplifying creating and editing documents, source-code editors provide additional features to speed up the code writing process. For instance, a source-code editor gives you syntax highlighting, autocomplete, indentation, and bracket matching, among other features, which you do not get to see on a basic text editor.

As such, you can use a source-code editor for general document writing and editing, but it is not wise to use a basic editor for writing code. For, even though you can do it, the lack of development-specific features on a basic text editor might not offer as good an experience as a source-code editor or an IDE (integrated development environment).

With that out of the way, here are the best text editors for Mac.

Visual Studio Code or VS Code is a freeware source-code editor from Microsoft. It is built on the Electron framework and is compatible with all major operating systems: Linux, macOS, and Windows. 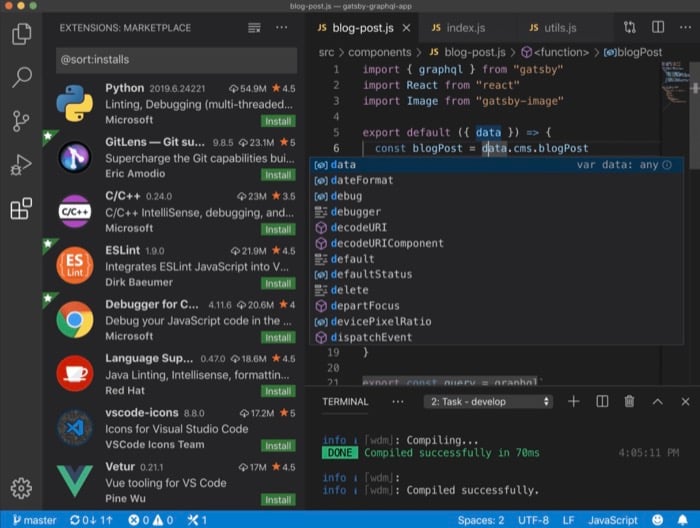 One aspect of VS Code that separates it from other source-code editors is that, instead of using a project-based system, it allows you to work with multiple directories and isolate them into different workspaces — kind of like a language-agnostic code editor.

Talking about functionality, you can use VS Code to write programs in various languages: C/C++, Java, Python, JavaScript, and Go. It provides an extensive set of features to help you in the coding process, such as support for syntax highlighting, snippets, code refactoring, debugging, intelligent code completion (or autocomplete), and Git integration. Moreover, you also get the ability to collaborate and work remotely with your peers in real-time.

If you are just getting started, Visual Studio Code provides features like IntelliSense and Peek Definition to help you understand various aspects of programming languages.

Atom is a free and open-source source-code editor developed by GitHub — now owned by Microsoft. As a result, a lot of the features you get on it are community developed and maintained. Similar to VS Code, Atom is also based on the Electron framework, although, unlike VS Code, it is not as feature-rich natively. But thanks to plugin support, you can hack various elements of Atom and add features to it selectively to suit your requirements and project workflow. 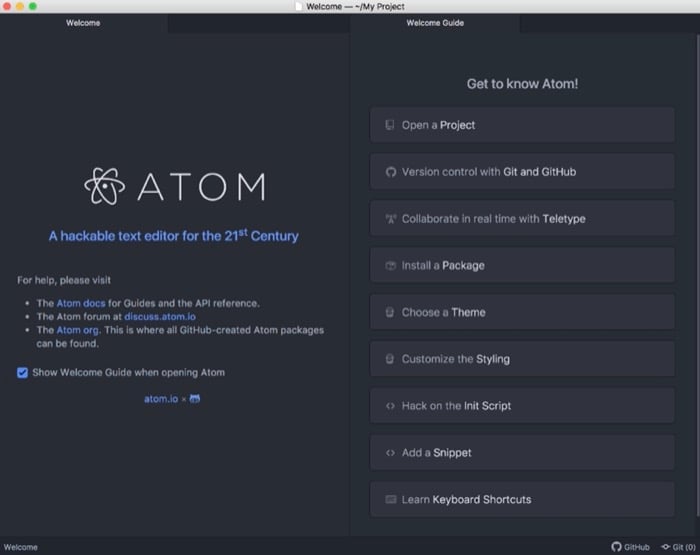 Besides customization, Atom offers you the usual slate of features, such as syntax highlighting,  smart autocompletion, and file system browser. Additionally, it also comes with a built-in package manager to help you search and install new packages conveniently on your system and Git integration to store and manage your projects right from the editor.

Coming to supported languages, using Atom, you can write code in C/C++/C#, Java, JavaScript, Python, Ruby, Scala, and many other programming languages. Moreover, collaborating and working with teammates is also possible in Atom, thanks to Teletype, which uses WebRTC to encrypt all communication between collaborators to offer a secure working platform.

Sublime Text is a shareware source code editor, meaning it offers most of its features for free but restricts a few to the paid offering, which you can upgrade to/purchase if you need the missing functionalities. It is designed with Python and web programming in mind and is one of the most preferred text editors on the Mac. But, you can also use it for other programming and markup languages. 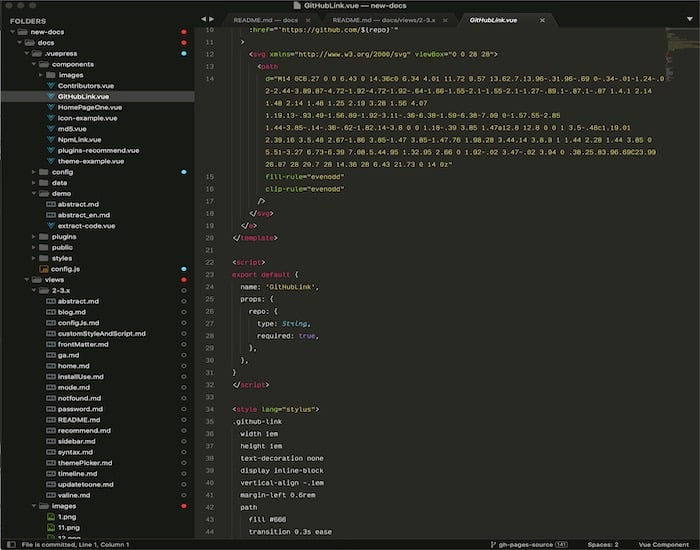 Similar to Atom, Sublime Text also offers plugin support that lets you add missing functionality to your editor to enhance your experience. Some of the handy features of Sublime Text include command palette, snippets, code auto-completion goto anything, goto definition, and split editing. In addition, Sublime Text also provides you a built-in package manager to make finding and installing third-party packages on the editor easy.

Besides Sublime Text, SublimeHQ has another product, Sublime Merge, which is a GUI-based version control (Git and merging tool) for Sublime Text that helps you search your repository, commit changes to it, and resolve conflicts faster.

BBEdit is a Mac-only text editor from Bare Bones Software. It is essentially a free version of the popular TextWrangler text editor, which got discontinued a few years back and is available exclusively on macOS. 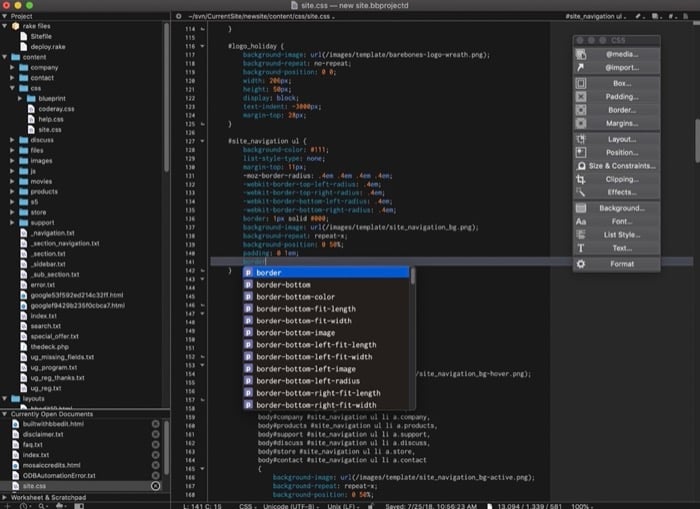 Unlike TextWrangler, though, BBEdit’s free tier offers enough features and programming functionalities that make it a noteworthy option among the plethora of other text editors out there. You can use it as a simple text editor to work with plain text files and also to write code or create custom scripts. BBEdit’s list of supported languages includes AppleScript, Python, Perl, RegEx, and Shell scripting.

As for features, BBEdit provides project definition tools, syntax coloring, code folding, auto code completion, and quick search and replace functionality, to name a few. Additionally, you also get support for FTP and SFTP for file transfer, along with the integration of code management systems.

Vim or Vi Improved is a clone of Vi with a series of improvements. Vi is a POSIX standard editor that comes pre-installed on most traditional Unix-compliant operating systems, including macOS. When put up against other text editors on this list, Vim has a completely different look and feel to it. 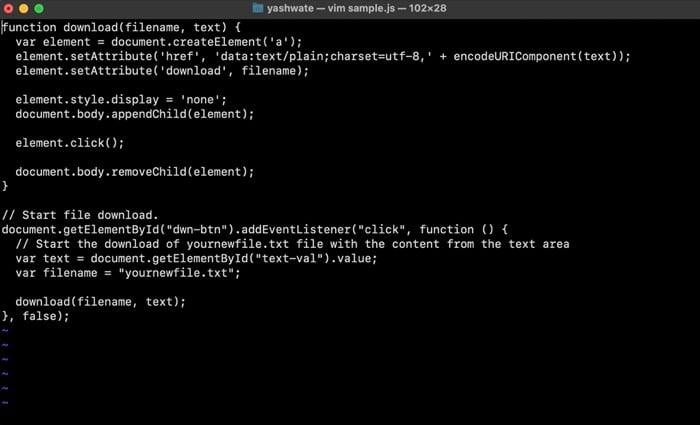 While most modern text editors focus on offering a nice-looking interface filled with a tonne of features and functionalities, Vim focuses on getting the basics right. And, it does that very well. You do, however, get extensive plugin support, with new plugins being developed continuously, to configure the editor to suit your coding style and workflow.

The lack of a graphical interface on Vim means all your interactions happen on the command line or terminal window. Plus, being a modal editor, there are different modes on Vim that might take you some time to get used to before you become comfortable using it. However, that said, once you learn Vim, you can do a whole lot more with it efficiently. And, you probably would not switch back to a regular text editor.

Emacs or Editor MACroS is another popular text editor for Mac. It is the preferred choice for many programmers. It shares its rivalry with Vim, with fans of both text editors not shying away from expressing the superiority of their favorite text editors. 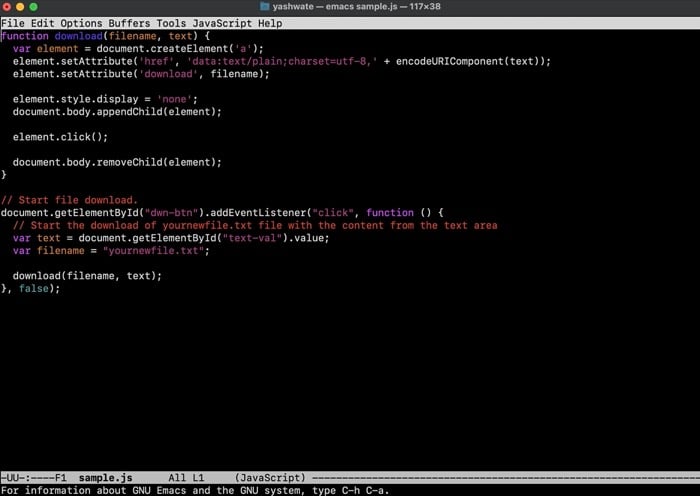 Much like Vim, Emacs also offers customization options, but it is more nuanced than Vim when it comes to configuration options. It has over 10,000 commands, and the interface allows you to combine these commands and leverage them to create macros for automating tasks in your workflow.

In terms of usability, Emacs also takes some time to pick up, just like Vim. However, the offerings you get with it totally make it a promising text editor for those who want an environment that allows them to perform/control pretty much every aspect of their programming workflow. To give you a quick rundown, Emacs provides everything from text editing, project planning, built-in mail and newsreader, packaging system, and built-in IRC client, to name just a few.

Using the text editors listed above, you can write and edit documents on your Mac with greater control over the text. If you are planning on using them to write code, which is likely, as you are reading this, you can make the most out of it by taking advantage of their development-specific features.

Text editors are one of the most heatedly contested topics on the internet. As we mentioned earlier, users of Vim and Emacs editors can often be seen getting into arguments around which of the two editors is better. In reality, however, it simply comes down to what text editor you are comfortable working with and which one of them fits your workflow perfectly.

But, to give you an answer, what truly classifies a text editor as “good” are core text editor essentials, such as user experience, ease of use, features, and customizability options — not to mention a low entry barrier, which itself determines if you will pick an editor in the first place or not.

2. What text editor comes with Mac?

TextEdit is the default text editor on Macs, and it comes pre-installed with macOS. You will find it in the Applications folder and the app allows you to write either in RTF (rich text format) or plain text (txt).

3. What is a good free text editor for Mac?

Most text editors on this list are free and come with a host of features. We feel picking one text editor among these is greatly influenced by your preference: what exactly you want in a text editor, how you plan on using it, and most importantly, your workflow. That said, though, if you want a generalized answer, we recommend using Visual Studio Code, which will get you pretty much all the essential functionalities you will need in your workflow without any compromises. However, if you want a minimal text editor and are comfortable working on a terminal interface, we recommend going with Vim. Even though Vim might pose some difficulty when you start with it initially, once you get a hold of it, you can work quickly and efficiently with it than most text editors out there.

Notepad++ is officially available on Windows only, so you cannot use it on a Mac. However, if you are used to Notepad++ and you have switched from Windows to Mac, we recommend checking out BBEdit 13 and SublimeText, both of which are easy to pick up and offer pretty much all the necessary features you would need.

It’s been a while since Apple released its M1 Macs. Consequently, most apps, including text editors, have now added support for the M1 chip. As a result, all the editors on this list will work perfectly fine on an M1 Mac.

Was this article helpful?
YesNo
TechPP is supported by our audience. We may earn affiliate commissions from buying links on this site.
Read Next
8 Best Clipboard Managers for Mac in 2023
#apple #Best Apps #MAC