The Samsung Galaxy S series is the brand’s flagship series, which is why a premium price tag is pretty much a given for it. But last year Samsung decided to add a slightly lighter-on-pocket feather to this series– the Samsung Galaxy S20 FE (Fan Edition). The smartphone was a massive hit and went on to become a bestseller with over 10 million units sold. 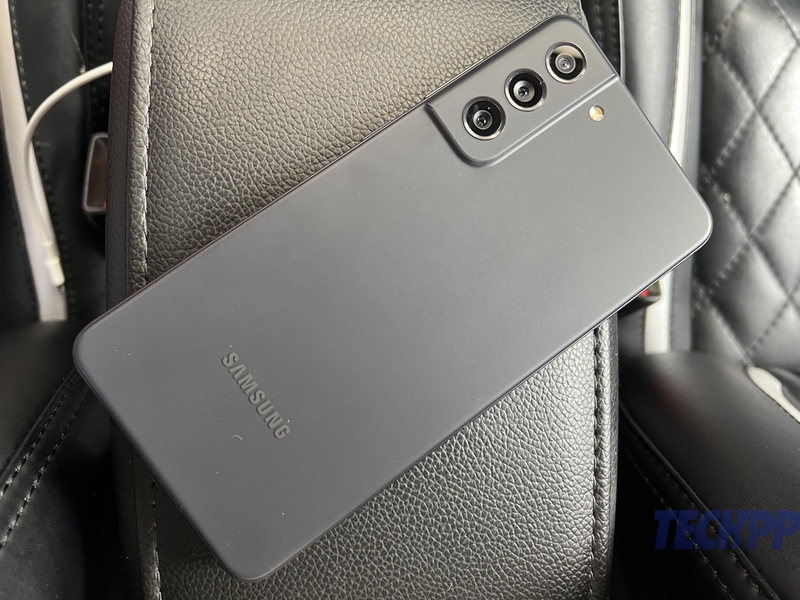 Unlike the S20 FE which came hot on the heels of the S20, Samsung has launched the Galaxy S21 FE a considerable time after the launch of the S21. Along with being the successor of the S20 FE, the phone is the slightly more affordable version of the Samsung Galaxy S21 launched last year. But its challenge is not just filling in the massive shoes of the S20 FE, but also dealing with the newly launched Galaxy S22 series as well as a plethora of budget flagships.

Them A Series looks

By the looks of the phone, you might end up placing the Galaxy S21 FE under the Galaxy A series umbrella rather than the Galaxy S series. The proud and unabashedly plastic back paired with the contour cut camera unit might have something to do with it. The phone’s back is plastic and makes no attempt to look anything but plastic. The phone has some Galaxy S21 genes as it also has the same rectangular camera unit placed on the extreme left side of the back but it lacks the metallic touch the Galaxy S21 brings along and has the same plain, plastic look all over. There is a Samsung logo in muted monochrome color on the lower side of the back.

On the front, it has a 6.4-inch tall display with really thin bezels around it while a punch hole notch sits on top that houses the front-facing camera. Bridging the gap between glass on the front and plastic on the back is the metal frame in the middle. It has the volume rocker and power/lock button on the right while the left side remains bare. Samsung has placed the SIM card tray, USB Type C port, and speaker grille on the base of the phone. It comes with an IP68 rating which makes it dust and water-resistant.

One of the stand-out design aspects of the Samsung Galaxy S21 was the metal accent on the camera unit, as that is missing from the Galaxy S21 FE, the phone looks a little ordinary. 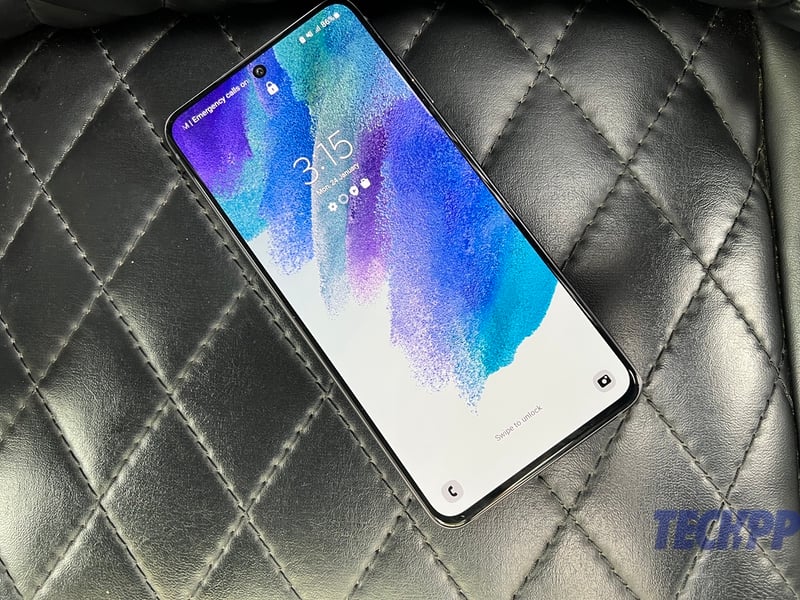 Do not get us wrong, it does not look bad and actually feels quite sturdy as plastic has that not-so-fragile thing about it as compared to glass but the phone does not feel like it is a premium smartphone. It simply does not stand out. We received the Graphite variant and are sure the Lavender and Olive colors are more eye-catchy, but nothing about the phone really screams “premium” and we do not think it has what it takes to make heads turn.

Time and again many have looked down upon Samsung devices powered by the Exynos processor. This is because Samsung often launches the Qualcomm Snapdragon variant of the same phone in other markets and launches Exynos-powered devices in India. The same thing has happened with the Samsung Galaxy S21 FE as well. The brand has launched the phone with the Qualcomm Snapdragon 888 processor in international markets while the Indian market gets the one powered by the Exynos 2100. This is paired with 8GB RAM. There are two storage variants of the device though – 128 GB and 256 GB, with no expandable storage. 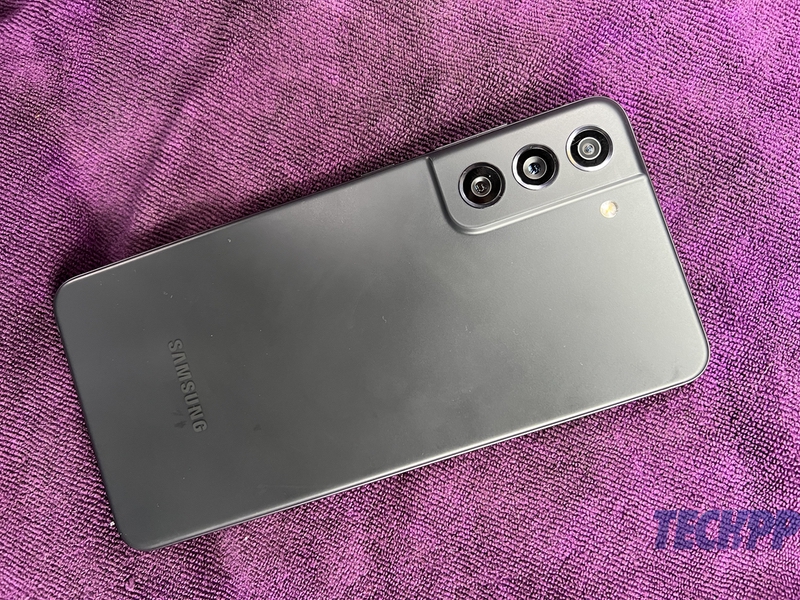 We frankly do not mind the difference in the processor as long as the performance of the device is on par with its Qualcomm counterpart and we have no reason to believe that it is not. The Galaxy S21 FE is more than capable of handling your everyday business. The phone can jump from one app to another and move through multiple tasks quite effortlessly. It is a pretty solid everyday performer. The same extends to the phone’s gaming performance. Both casual and high-end games run very well on the device. Power-hungry games like Call of Duty, and Genshin Impact ran without any hiccups even on maxed-out settings. The phone also comes with support for 5G, making it future-proof.

Adding to the smooth gaming experience is the tall, beautiful 6.4-inch Dynamic AMOLED 2X display with support for HDR 10+. Samsung pretty much bosses the display department and the Galaxy S21 FE is no different. The display of the phone produces deep, rich contrasts and is bright enough to view content even under the harshest sunlight. It comes with a 120 Hz refresh rate, which makes scrolling on the phone an absolute treat. That said, it does not come with a variable refresh rate and you can only choose from 60 Hz or 120 Hz. It is also home to the in-display fingerprint scanner which honestly needs to be faster as it can take a second to read your fingerprint and unlock the phone. However, it is better than the face unlock on the phone which is quite erratic and often refuses to work in low light conditions. 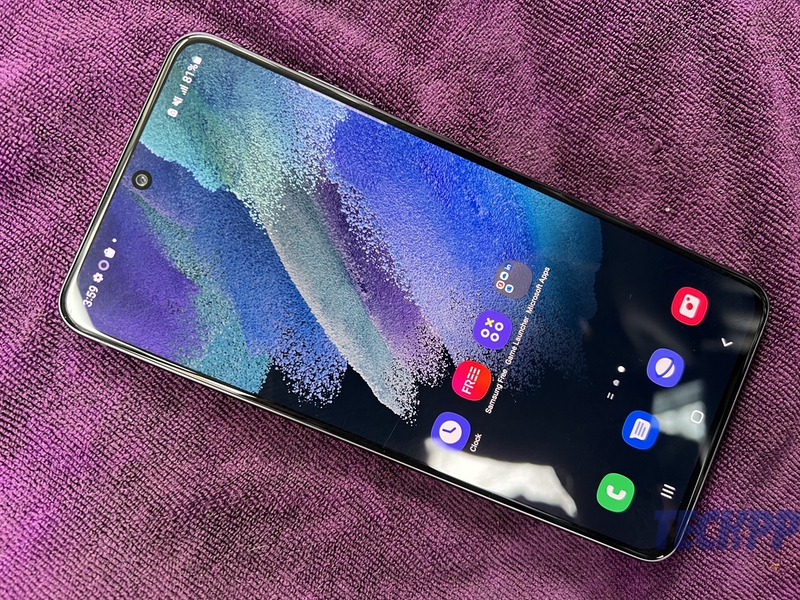 The Samsung Galaxy S21 FE has a great display and combines that display with the loud and clear stereo speakers that the phone brings along and you have a great multimedia device. The phone is also quite light, weighing about 177 grams making it the perfect phone to binge-watch movies and series without it feeling like a task. 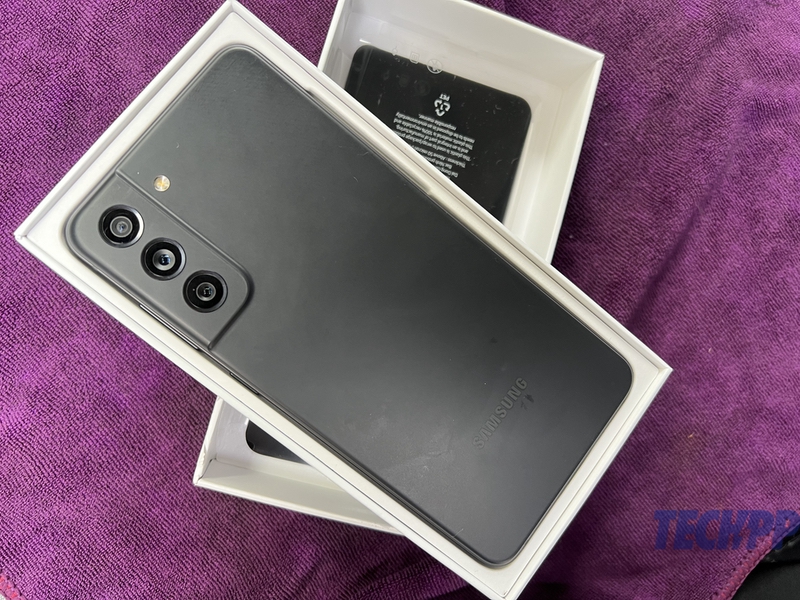 The main camera is the star of this trio show. It captures beautiful daylight images with tons of detail, produces lovely, rich colors, and handles textures well. The colors may be a little on the saturated side for those who like their pictures to mimic real color settings, but they are pleasantly saturated and not unrealistically so. The phone is quite quick to focus on subjects and does not take time to process images as well. There is no dedicated macro sensor on the phone, which means you have to rely on the main sensor to take close-up shots. It is one area the camera struggles with the most. It just has a hard time focusing on petite subjects and often delivers out-of-focus close-ups. 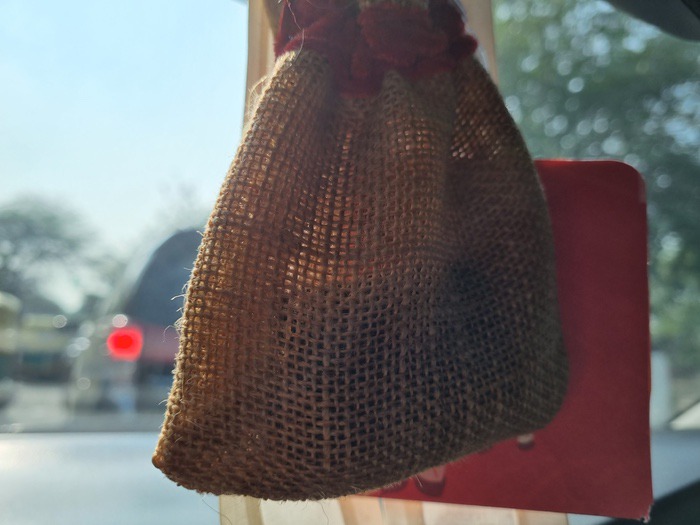 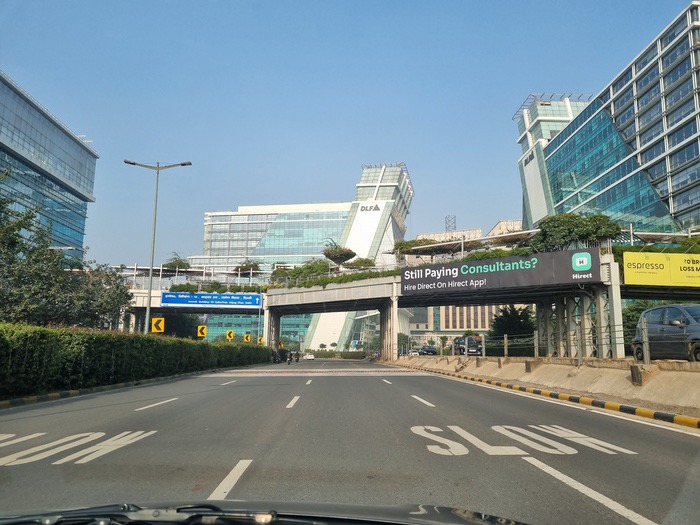 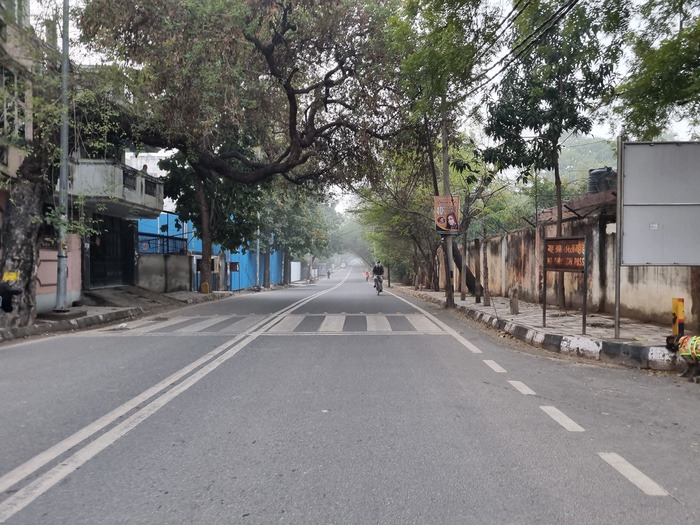 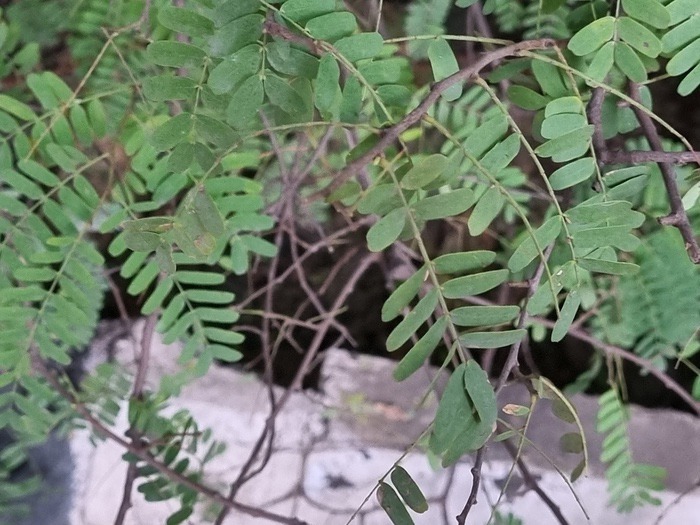 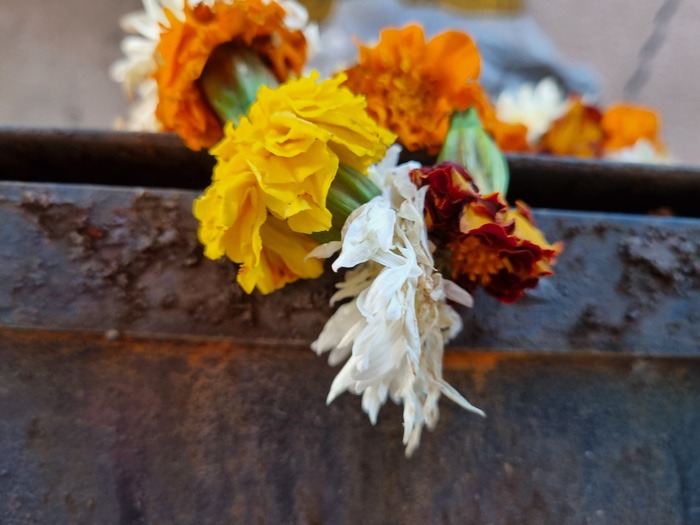 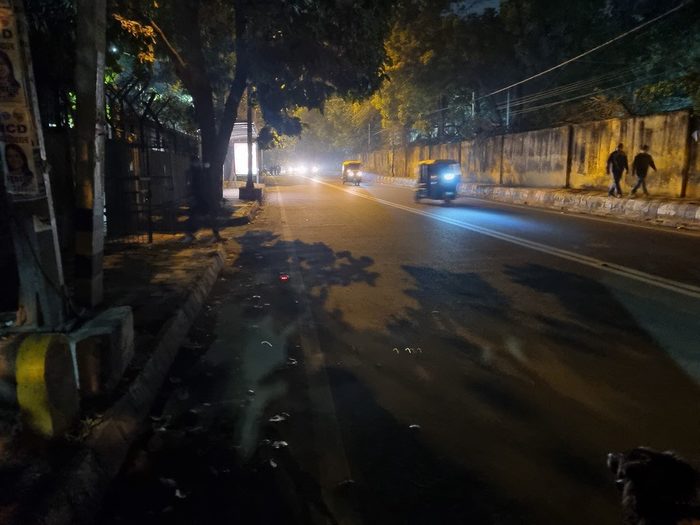 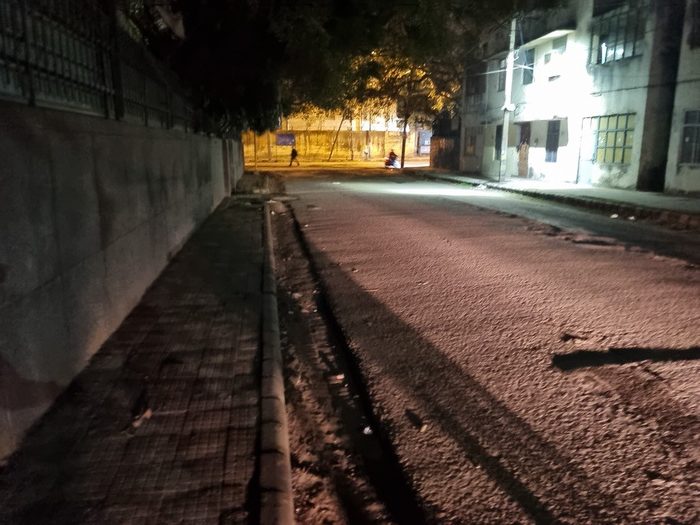 Details take a slight hit as the lights dim down but the phone still performs impressively. The camera can even handle light shadows in dark environments well and with a little patience, you can capture admirable details even in low light conditions. The ultrawide camera does a decent job as well. It does not capture as much detail as the main sensor but captures enough to deliver a good ultrawide shot. The 3X optical zoom comes in handy when you wish to capture a subject without getting in their space.

The Galaxy S21 FE actually gets a bump up in megapixels as compared to the Galaxy S21 5G in the front-facing camera department. The phone brings a 32-megapixel sensor to the table as opposed to a 10-megapixel sensor that sits on the Galaxy S21’s front. The front camera on the S21 FE is a good performer and captures plenty of detail. The colors produced by the selfie camera are actually more accurate and closer to reality than the camera on the back, which may make them seem a little muted to those who like their selfies to pop.

The Galaxy S21 FE shoots very good videos too and can shoot 4K videos at up to 60 fps. Videos captured in well-lit environments capture ample detail and OIS helps minimize any shakes. The camera interface of the Galaxy S21 FE is quite feature-laden, much like most Samsung devices. It offers a plethora of modes that one can use and give a little extra oomph to the otherwise usual photography tricks. 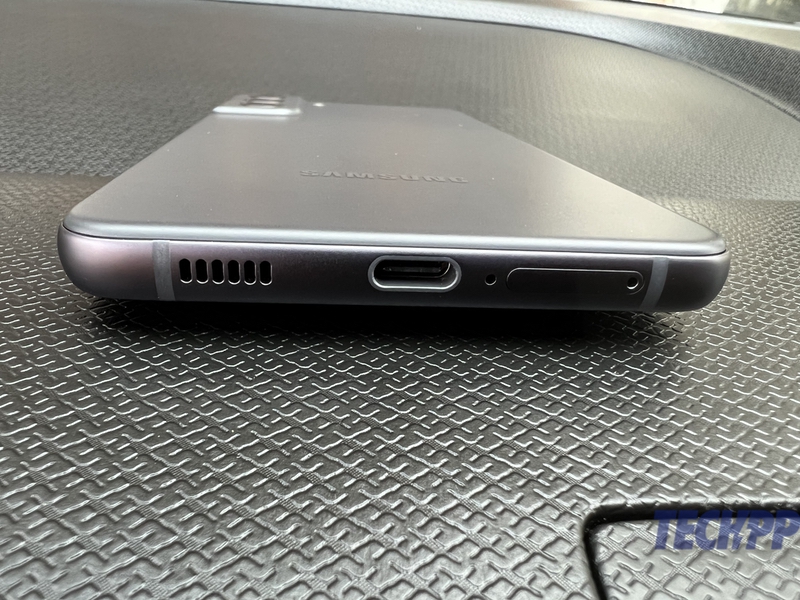 The Galaxy S21 FE comes with a 4,500 mAh battery which is slightly bigger than that of the Galaxy S21 5G which came with a 4,000 mAh battery. But even with a battery of that size, the S21 FE will not be able to see you through a day of heavy-duty tasks. That said, if you are not usually glued to your phone 24x 7 and use it moderately, the phone will be able to make it without needing an extra charge by the end of the day.

The phone comes with support for 25W fast charging. This may not sound a lot by fast charge standards that some phones and we are being subjected to in today’s day and age but it does not feel too sluggish either. Samsung does not provide the charger in the box, which means you will have to buy an adapter if you don’t have one to get maximum speed. The phone takes well over an hour to go from zero to 100 percent with a 25 W charger but can get from zero to 50 percent quite quickly (in about half an hour). It also gets a little warm to touch while charging but never gets even close to alarming levels. 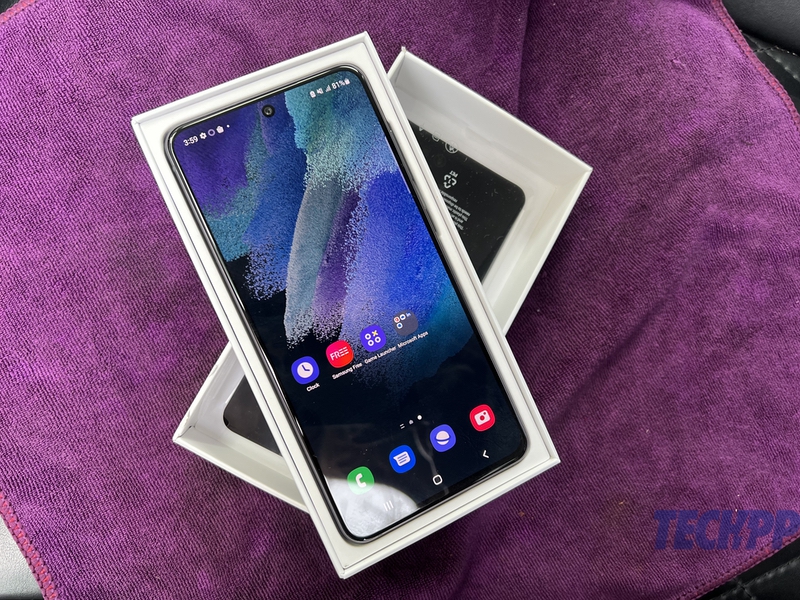 The Galaxy S21 FE is one of the few phones that come with Android 12 out of the box but it may be hard to spot because Samsung has such an extensive and feature-rich UI layer on top – OneUI 4.0. It comes with a handful of third-party apps pre-installed but they are not too overbearing in number. OneUI 4.0 brings in plenty of customization options and features, allowing you to change the look of your phone if you wish to. Even though the UI is quite loaded, it does not feel too overwhelming and is quite easy to get around.

Running out of time to become a bestseller? 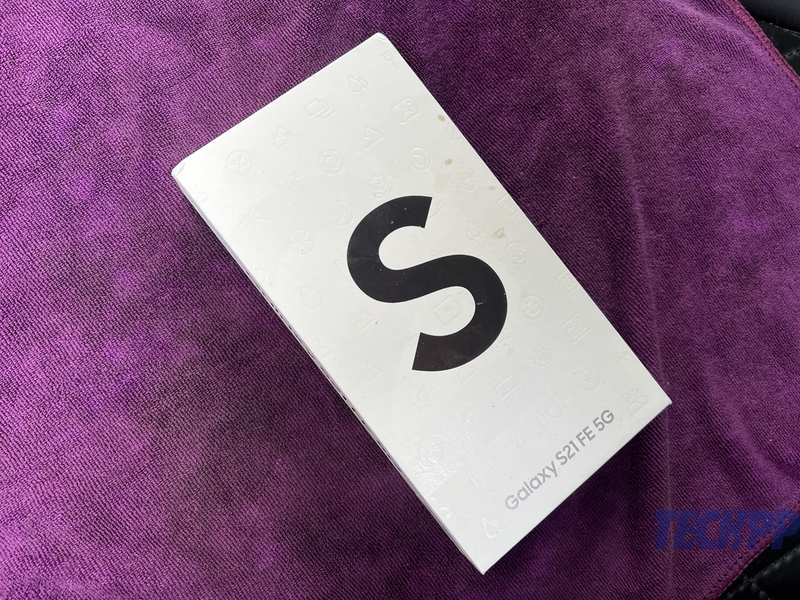 One of the biggest challengers to the Galaxy S21 FE will be the OnePlus 9 series with the OnePlus 9 pretty much-going head to head with the device. The OnePlus 9 costs Rs. 49,999 for the 8 GB/ 128 GB version while the 12 GB/ 256 GB variant is priced at Rs. 54,999. Along with being more affordable, the OnePlus 9 comes with a more premium design, and has faster charging, and a simpler UI, and will be the pick of those who like and trust Qualcomm Snapdragon more. Then there is the OnePlus 9 Pro which comes with the official starting price of Rs. 64,999 but is sometimes available for lower prices. Starting at the same price of Rs 64,999 is perhaps the best phone 2022 has seen so far, the iQOO 9 Pro, which features the latest Qualcomm Snapdragon 8 Gen 1 processor and comes loaded with all things flagship.

There is also the “budget flagship” segment which boasts of devices like the OnePlus 9 RT, the Asus 8Z, the iQOO 9, and the Xiaomi 11T Pro, all of which come with Snapdragon 888 chips or its variants and have lower price tags.

The launch of the Galaxy S22 series makes the S21 FE part of an older generation. The Samsung Galaxy S21 FE is a really good phone and leaves us with little to complain about. It is a great high-end performer, but it might just have run out of time.

Review Overview
Was this article helpful?
YesNo
TechPP is supported by our audience. We may earn affiliate commissions from buying links on this site.
Read Next
Samsung Galaxy Unpacked 2023: Galaxy S23 Ultra with 200MP, Galaxy Book 3 with...
#review #samsung #Samsung Galaxy S21 FE