There are a lot of Windows 8 tablets and hybrids out there, not to mention the ever-growing horde of Android slates. But the iPad is still the king (or queen?) of the tablets, even if the iPhone isn’t holding his supremacy quite well. Apple, as always, can enhance even further its position on the market by endowing its offsprings with unique and to-drool-for features. Such a thing can be applied to the upcoming iPad, and more exactly, to its Smart Cover. The Smart Cover has been introduced at the unveiling of the second generation iPad and is present in the latest, 4th generation tablet, as well as in the iPad Mini. Currently, the Smart Cover’s main purpose is to protect your iPad’s screen and also, thanks to the microfiber in the side that’s face the screen, it cleans it. Steve Jobs’ own words:

This isn’t a case anymore.It’s a cover for the screen. The micro-fiber screen cleans the screen every time you close it, and it’s incredibly minimal.

But the Smart Cover hasn’t improved too much since its introduction until this very moment. And maybe Apple might be missing an opportunity here, don’t you think? However, a number of patents have surfaced on the web recently and along with the usual hearsay and speculation, let’s see just how smart could this iPad cover get.

Improvements that would make the Smart Cover awesome

The Smart Cover currently cleans and protects your iPad screen, and it is obviously not the best solution for that, proof to that being the mediocre rating it has even on the official Apple Store. To put it bluntly, the Smart Cover is there just to … be there. And now it’s the right time for Apple to get much more creative with its role in how we interact with the iPad. How the Smart Cover could look like and what uses it could have might even influence your decision to buy or not an iPad.

Apple could really up the ante with the inclusion of wireless charging in its Smart Cover. The technology is not new and those that know their way in the tech world might remember that even Palm tried its luck with this. Now, the wireless charging standard seems to get its biggest push forward in the smartphone market, but let’s hope that this will come to tablets, as well. Apple’s patent for such a technology is called “Integrated inductive charging in protective cover“.

Speaks for itself, doesn’t it? But just as always, Apple wants to be different and if wireless charging will be present in the iPad, it will definitely appeal to everybody. From the patent description, we find out that the Smart Cover could actually act as the charger, thus allowing you to charge the iPad on-the-go! Therefore, the Smart Cover will act as the inductive power transmitter, thanks to an internal battery, which will have to be charged itself. From the patent description:

One of the biggest challenges imposed by such a technology would probably be the weight gain. Probably it won’t increase it by much, but  this might be one of the reasons why Apple didn’t implement this earlier in its Smart Cover. We know how much Apple values the lightness of its devices.

Also thanks to another patent discovery, we are free to let our imagination go wild even further. Relating to the charging chapter is the solar panel functionality. It was also discovered along with the wireless charging one. Now, this is very, very hard to believe but who knows what Apple might be hiding in its secret laboratories? 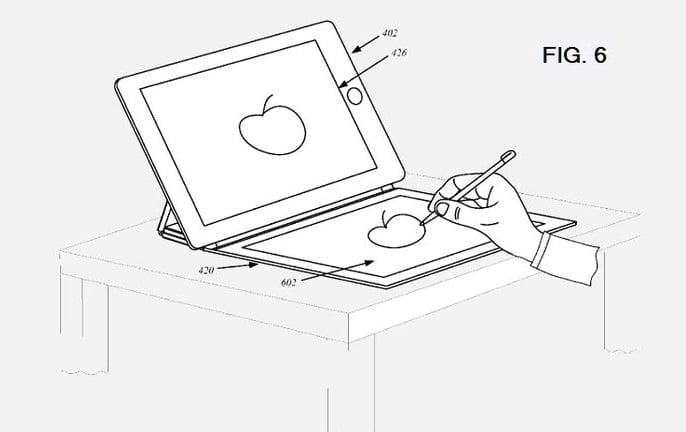 To put it simply, the Smart Cover’s surface could contain solar cells that would be able to garner and store solar energy and when needed, feed the iPad with it. This is not everything that ingenious journalists managed to dig up. Coming up next is what appears to be some sort of a flexible display:

Apple has invented a next generation Smart Cover that is arranged to communicate with the iPad by way of a communication channel. This future Smart Cover will include the following: a flexible flap having a size and shape in accordance with the size of the iPad’s display where at least a portion of the flexible flap is covered by a flap display configured to present visual information; and a connecting portion, the connecting portion arranged to provide at least a communication channel arranged to convey information between the iPad and this future Smart Cover where at least some of the information is presented visually on the flap display.

What we understand from this is that a portion from the Smart Cover will provide an interactive display where the user will see some notifications, perhaps. This reminds me of the S View cover for the Samsung Galaxy S4. However, in order for the display to be functional, it’s obvious that it needs to be flexible, because the Smart Cover itself is flexible. But let’s take this with a grain of salt. I personally feel that it would be redundant to have another display on the cover of your device, it just beats the purpose. I agree with wireless charging and enhanced protection but this seems just far too much. 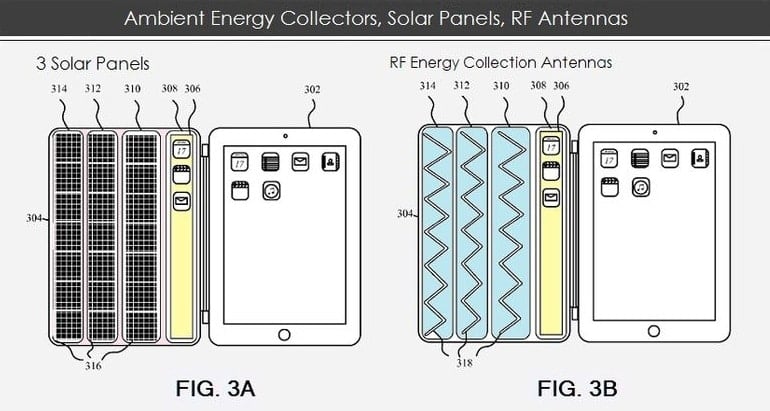 We’ve decided to talk above only about the most possible inclusions in the next Smart Cover, but there are many others left that we’re going to briefly describe.

Have a look at the gallery below with the most important drawings from Apple’s filed patents relating to a future Smart Cover.

Was this article helpful?
YesNo
Photo Credits: Patently Apple
TechPP is supported by our audience. We may earn affiliate commissions from buying links on this site.
Read Next
Xiaomi Pad 5 Review: Taking on the iPad
#ipad #ipad news